“A young cellist whose emotionally resonant performances of both traditional and contemporary music have earned her international recognition, … Weilerstein is a consummate performer, combining technical precision with impassioned musicianship.” So stated the MacArthur Foundation when awarding Alisa Weilerstein a 2011 MacArthur “genius grant” Fellowship, prompting the New York Times to respond: “Any fellowship that recognizes the vibrancy of an idealistic musician like Ms. Weilerstein … deserves a salute from everyone in classical music.” In performances marked by intensity, sensitivity, and a wholehearted immersion in each of the works she interprets, the American cellist has long proven herself to be in possession of a distinctive musical voice. As the Los Angeles Times explains, “Weilerstein’s cello is her id. She doesn’t give the impression that making music involves will at all. She and the cello seem simply to be one and the same.” An exclusive recording artist for Decca Classics since 2010, Weilerstein is the first cellist to be signed by the prestigious label in more than 30 years.

Born in 1982, Weilerstein discovered her love for the cello at just two and a half, when her grandmother assembled a makeshift set of instruments from cereal boxes to entertain her while she was ill with chicken pox. Although immediately drawn to the Rice Krispies box cello, Weilerstein soon grew frustrated that it didn’t produce any sound. After persuading her parents to buy her a real cello at the age of four, she developed a natural affinity for the instrument and gave her first public performance six months later. At 13, in October 1995, she played Tchaikovsky’s “Rococo” Variations for her Cleveland Orchestra debut, and in March 1997 she made her first Carnegie Hall appearance with the New York Youth Symphony. A graduate of the Young Artist Program at the Cleveland Institute of Music, where she studied with Richard Weiss, the cellist also graduated in May 2004 with a degree in History from Columbia University. In November 2008, Weilerstein, who was diagnosed with type 1 diabetes when she was nine, became a Celebrity Advocate for the Juvenile Diabetes Research Foundation. 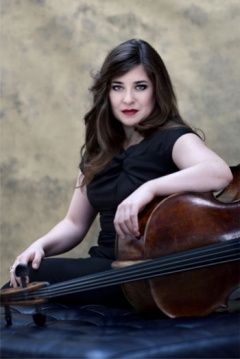