A pianist who radiates palpable magnetism and a distinctly contemporary sensibility, Yuja Wang is an astounding artist whose awe-inspiring technique is matched only by her eloquence as a musician. Since her breakthrough debut with the Boston Symphony Orchestra in 2007 while still a student at the Curtis Institute of Music, she has established herself as an international sensation and a fixture among the world’s leading orchestras—including those of New York, London, Amsterdam, and Berlin—regularly joining them on tours of the Americas, Europe, and Asia. Championed early on by preeminent maestros including Gustavo Dudamel, Michael Tilson Thomas, and the late Claudio Abbado, she is one of today’s most sought after soloists, as well as a fiercely dedicated chamber musician, recitalist, and Grammy-nominated recording artist.

To launch the 2015-16 season, Yuja joins Tilson Thomas and the San Francisco Symphony on their “European Festivals Tour,” performing Beethoven and Bartók at London’s BBC Proms, the Edinburgh, Rheingau, Lucerne, and Enescu festivals, and in Amsterdam, Luxembourg, and Paris. She plays Messiaen’s Turangalila Symphony with the New York Philharmonic under Esa-Pekka Salonen and the Orquesta Sinfónica Simón Bolívar under Dudamel, both in Caracas and throughout Europe. Mozart’s “Jeunehomme” Concerto is on the program for her debut with the Vienna Philharmonic under Valery Gergiev, as well as for appearances with the New York, Los Angeles, and Israel Philharmonics led by Charles Dutoit, Lionel Bringuier, and Zubin Mehta, respectively. A U.S. tour with Mikhail Pletnev and the Russian National Symphony showcases both the Mozart and Tchaikovsky’s Second Concerto, the latter of which she reprises with the Moscow Philharmonic and the Royal Concertgebouw Orchestra, in Amsterdam and Asia. In recital, Yuja tours France, Holland and Germany, and reunites with violinist Leonidas Kavakos for a complete Brahms sonata cycle at the Edinburgh Festival. 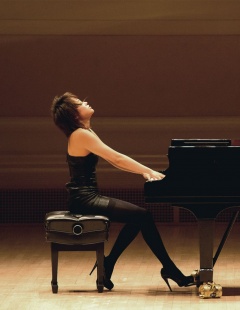