Founded by Vincent Dumestre in 1998, Le Poème Harmonique is an ensemble of enthusiastic musicians dedicated to the performance of 17th and 18th century music. Enjoying a strong presence on the French and international scenes, its inventive and demanding programs reflect a knowledgeable approach to the musical repertoire and an in-depth appreciation of vocal and instrumental textures.

It performs familiar and less familiar pieces by Lalande, Lully, Couperin, Clérambault, Charpentier and others, which once set the pace for life at Versailles, its routines and ceremonies, along with works from Baroque Italy, including by Monteverdi and Pergolesi, and English pieces by Purcell and Clarke, among others. Treading a fine line between scholarly and popular music, performed as a chamber ensemble or full orchestra, Le Poème Harmonique explores dance and airs de cour, the Venetian carnival and Leçons de Ténèbres, traditional romance and the grand motet.

It also paints vast operatic frescoes, marking a return to the spirit of the theatrical troupe and the artistic synthesis of the Baroque aesthetic; recently the Baroque zarzuela Coronis by Sebastián Durón staged by Omar Porras, great press and public success (production Théâtre de Caen). Its ongoing collaboration with director Benjamin Lazar, sealed by a mutual appreciation for Lully, has resulted in widely acclaimed shows (including Le Bourgeois gentilhomme, Cadmus and Hermione, and the recent Phaéton performed at the Perm Opera in Russia and at the Royal Opera of Versailles with Teodor Currentzis’choir and orchestra, musicAeterna). It also enlisted in collaboration in which music meets other artistic disciplines – puppetry, circus, theatre… – such as Caligula, puppet opera by Giovanni Maria Pagliardi with Mimmo Cuticchio, the Baroque Carnival staged by Cécile Roussat with Julien Lubek, Elevations conceived with circus artist Mathurin Bolze.

During season 2020/2021, Le Poème Harmonique performs new creations : Egisto by Cavalli in concert version and Les Symphonies pour les Soupers du Roi by Lalande, two productions at the Royal Opera of Versailles which will be recorded; Mon Amant de Saint Jean (My lover of Saint Jean), a recital with the mezzo-soprano Stéphanie d’Oustrac in the spirit of the Roaring Twenties which will be created in scenic version at the Chapelle Corneille – Opéra de Rouen Normandie; the Nisi Dominus by Vivaldi with Eva Zaïcik, which will also be recorded and created at the Festival de l’Abbaye de Saint Michel en Thiérache and at the Festival de Musique Baroque du Jura.

In 2021, two news records: CD of Cadmus & Hermione by Lully in concert version (label Château de Versailles Spectacles) and CD of the Nisi Dominus by Vivaldi (label Alpha), will join a vast discography of some thirty recordings. Illustrating the advances made by the ensemble over the past two decades are major public successes, including Anamorfosi (press awarded: Recording of the month from Gramophone, Diapason d’Or and Choc from Classica magazine), the box-set 20 CD 20 years, Aux marches du palais devoted to traditional French songs, or Nova Metamorfosi, and benchmark performances of major works from the Baroque repertoire (Combattimenti! by Monteverdi, Leçons de Ténèbres by Couperin, Te Deum by Charpentier & Lully). 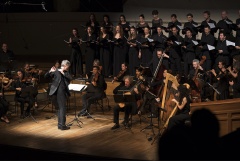