Invested as Kammersängerin of the Bavarian State Opera (2007) and holder of the Bavarian Maximilian Order for Science and Art (2010), Diana Damrau has forged close links with the Bayerische Staatsoper in Munich where she has been seen in new productions of Lucia di Lammermoor, Les contes d’Hoffmann (the four heroines), Ariadne on Naxos (Zerbinetta), The Silent Woman (Aminta), The Magic Flute (Queen of the Night) and Rigoletto (Gilda). Other high profile appearances have included La traviata (Sophie) and The Abduction from the Seraglio (Constanze).

The Metropolitan Opera has been a house in which the soprano has performed her signature roles, been broadcast in HD to cinemas globally and made seven role debuts since her own debut there as Zerbinetta in 2005. Highlights have included new productions of Rigoletto (Gilda), Il barbiere di Siviglia (Rosina), Le comte Ory (Adèle) and Les pêcheurs des perles (Leïla). Other engagements have included the title roles in Lucia di Lammermoor, La traviata, Manon, La Sonnambula and La Fille du Régiment. She was also the first singer in Metropolitan Opera history to perform the roles of Pamina and Queen of the Night in different performances of the same run of Mozart’s The Magic Flute.

Diana Damrau has twice participated in the annual inaugural performance at La Scala di Milano; in 2004 in the title role of Salieri’s Europa Riconosciuta at the house’s grand reopening and in 2013 as the title role in a new production of La traviata to commemorate Verdi’s 200th anniversary.

Damrau has also appeared there as Lucia in Lucia di Lammermoor as part of Milan’s Expo in 2015. In 2005 she gave her role debut as Susanna in a new production of Le nozze di Figaro and returns in 2016 in another new production of the piece, but on this occasion as La contessa. The soprano has also performed contemporary works for the opera stage in roles written especially for her, most notably as the title role in Iain Bell’s operatic adaptation of Hogarth’s A Harlot’s Progress (Theater an der Wien 2013) and as Drunken Woman/Gym Instructress in Lorin Maazel’s 1984 (Royal Opera House 2005).

Diana Damrau has established herself as one of today’s most sought-after interpreters of song, regularly performing at most renowned venues such as Wigmore Hall, Carnegie Hall, Berlin’s Philharmonie and the Salzburg Festival. She enjoys close artistic partnerships with pianists Helmut Deutsch and Craig Rutenberg and frequently performs in recital with harpist Xavier de Maistre. The latter collaboration can be heard in the CD release Nuit d’étoiles and a DVD capturing their performance at the Festspielhaus Baden-Baden.

Recording exclusively for EMI/Virgin Classics (now Warner/Erato), Diana Damrau made her recording debut with Arie di Bravura – a collection of Mozart and Salieri arias. Subsequent solo releases have included Donna – a recording of Mozart arias, COLORaturaS – a selection of coloratura arias from the romantic period, Poesie – orchestral songs by Richard Strauss (awarded the ECHO Klassik prize in 2011) and songs by Franz Liszt. 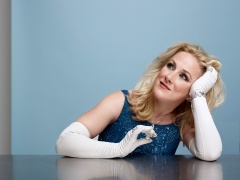