Riccardo Chailly, who was born in 1953 in Milan, studied at the Conservatories of Perugia, Rome, and Milan and at the Accademia Musicale Chigiana, beginning his career as an assistant to Claudio Abbado at La Scala in Milan. Chailly was appointed Music Director of the Berlin Radio Symphony Orchestra in 1980, and in 1988 he moved to the same position with the Royal Concertgebouw Orchestra Amsterdam, which he helmed for sixteen years.

From 2005 to 2016, Riccardo Chailly served as head of the Leipzig Gewandhaus Orchestra; starting in 2015, he became Music Director of La Scala in Milan, and since the summer of 2016 he has held the position of Music Director of the Lucerne Festival Orchestra.

As an opera conductor – in addition to his performances at La Scala – he has appeared at the Metropolitan Opera in New York, the Royal Opera House in London, Zurich Opera, the Bavarian and Vienna Staatsoper companies, Chicago Lyric Opera, and San Francisco Opera.

Riccardo Chailly has received many prizes for his more than 150 CDs, including two Echo Klassik Awards (in 2012 and 2015); Gramophone magazine chose his account of the Brahms symphonies as Recording of the Year in 2014. Riccardo Chailly is a Grand’Ufficiale della Repubblica Italiana, Cavaliere di Gran Croce, and a Knight in the Order of the Netherlands Lion. In 1996 he was made an Honorary Member of the Royal Academy of Music in London, and in France he has been an Officier de l’Ordre des Arts et des Lettres since 2011. 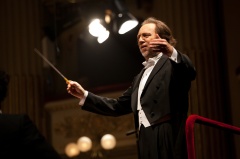