Marco Beasley was born in Portici, near Naples, in 1957. During his musical studies at the University of Bologna, he deepened his knowledge of the two stylistic pivots of the late Renaissance – recitar cantando and sacred and secular polyphony. He thus began an active concert career which quickly took him to some of the most prestigious venues, from the Mozarteum in Salzburg to the Concertgebouw in Amsterdam, from the Accademia di Santa Cecilia in Rome to Lincoln Center in New York.

As a singer, actor and writer, the personality of Marco Beasley embraces the carefree soul of Naples, the joie de vivre of making music, and the desire to confront the world of poetry and literature.
"Many different qualities reside within him: the clear and unmistakable purity of timbre in his voice; a very particular vocal technique which is the result of extensive personal study and historical research; the love of words, both sophisticated and dialectical; a natural predisposition for communication and expressiveness. All result in a variety of vocal colors and registers, a captivating musical approach in which joy and burlesque irreverence give way to a more plaintive and solitary style, at once intimate and moving. From Gregorian chant to polyphony, from the sixteenth-century frottola to motets, from recitar cantando to the great Neapolitan songs, up to modern re-inventions of historical genres: Marco’s exceptional qualities both vocal and expressive, united with his personal sensibility and fantasy, result in interpretations which are always new and allow him to cover an enormously vast range of musical styles and periods" (from an interview with M° Guido Morini).

His personal research into vocal production and the intelligibility of sung texts have earned him the praise of an ever-increasing public. In 2009 the Dutch VSCD (Association of Theater and Concert Halls) nominated him for Best Performer of the Year.

Marco Beasley’s discography is ample and wide-ranging. Most recordings are with the ensemble Accordone, which he founded together with Guido Morini and Stefano Rocco in 1984. In 2014, he chose to leave the group in order to venture down an even more personal and independent path unconnected with the name of the ensemble.
2013 marked the release of the CD Il Racconto di Mezzanotte, in which the singing is more than ever the sound of a narration, an intimate and contemplative tale recounted entirely by single voice. With this CD and the recent publication of Le Strade del Cuore (2016) he started a self-production; these recordings are exclusively sold at the concert's venues. 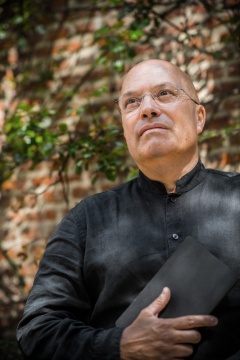