Founded in Berlin in 1982 and recognized today as one of the world's leading chamber orchestras, the Akademie für Alte Musik Berlin, or Akamus, enjoys an unprecedented history of success. The ensemble, which performs regularly in Europe's leading musical centers, has toured Asia, North America, and South America. Concert tours will take the orchestra in 2016 to Buenos Aires and to Japan, in 2017 to the USA.

Ever since the reopening of the Berlin Konzerthaus in 1984, the ensemble has enjoyed its own concert series in Germany’s capital, and since 1994 has been a regular guest at the Berlin Staatsoper. Starting with the 2012-13 season Akamus also has an own concert series at Munich’s Prinzregententheater. Each year Akamus gives circa 100 concerts, ranging from small chamber works to large-scale symphonic pieces, and performs under the artistic leadership of its concertmasters Stephan Mai, Bernhard Forck, and Georg Kallweit.

The close partnership with René Jacobs has produced many celebrated opera and oratorio productions. The latest interpretations of Mozart’s operas The abduction from the seraglio and The Magic Flute, as well as J. S. Bach’s St. John and St. Matthew Passion, has been highly praised by critics and audience.

The ensemble has also worked regularly with conductors such as Marcus Creed, Daniel Reuss and Hans-Christoph Rademann. The orchestra will be led by Emmanuelle Haïm, Bernard Labadie, Paul Agnew and Rinaldo Alessandrini in the upcoming seasons.

Most notable is the congenial cooperation with the RIAS Chamber Choir, whose quality is recognized by numerous award-winning recordings. Akamus works regularly with internationally renowned soloists like Isabelle Faust, Andreas Staier, Alexander Melnikov, Anna Prohaska, Werner Güra and Bejun Mehta. Moreover, Akamus has extended its artistic boundaries to work together with the modern dance company Sasha Waltz & Guests for innovative productions like Purcell’s Dido and Aeneas and Medea (music by P. Dusapin).

The international success of the Akademie für Alte Musik Berlin is highlighted by well over a million recordings sold to the public. Recording exclusively for harmonia mundi France since 1994, the ensemble’s CDs have earned many international prizes, including the Grammy Award, the Diapason d'Or, the Cannes Classical Award, the Gramophone Award, the Edison Award, the German Record Critics’ Award, the MIDEM Classical Award 2010 and the Choc de l’Année. The latest additions to the orchestra’s discography are CDs devoted to Handel’s Water Music, Bach’s St. John Passion conducted by René Jacobs and Mendelssohn’s Elias conducted by Hans-Christoph Rademann.

The orchestra has been honoured with the Telemann-Preis Magdeburg and in 2014 with the Bach Medaille Leipzig and the ECHO Klassik. 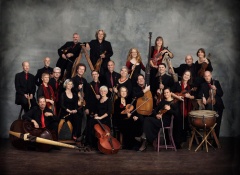