The Villiers Quartet is winner of the First Prize of the 2015 Radcliffe Chamber Music Competition, and Quartet-in-Residence at the University of Oxford.

Hailed as one of the most charismatic and “adventurous” quartets of the British chamber music scene (The Strad), the Villiers Quartet have developed an international reputation as exceptional interpreters of English composers including Elgar, Britten and Delius. Formed in 2011, they have been declared “one of the best quartets around today” (Jerry Horner, Fine Arts Quartet), and their performances of Shostakovich and Tischenko have been hailed as “masterful playing.” (Classical Source)

The VQ has been invited to present masterclasses at Dartmouth College, Syracuse University, Sherborne School, Nottingham High School, and the University of Nottingham. Their internationally acclaimed VQ New Works Competition encourages audiences to interact with contemporary music performance online, and supports the creation of new works for string quartet. 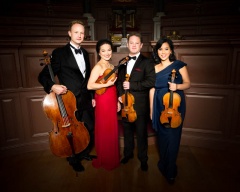