The cellist and ensemble director Stefano Veggetti over the past years of his musical activity has been unanimously appreciated for his highly accurate, virtuosic playing, outstanding musicianship and understanding of period style, and for a warm and lively stage presence which opens up new spaces of expression, persuasiveness and intensity in the experience of communication. He obtained his cello diploma from the Conservatory of L’Aquila under David Cole, subsequently winning a scholarship to continue his studies in Philadelphia (USA) with Orlando Cole. Fascinated by the sound of period string instruments, upon his return to Europe he attended masterclasses with Anner Bijlsma, and he has since played as soloist and in chamber music ensembles performing in Europe, Mexico, and the USA with musicians and ensembles such as Anner Bijlsma, l’Archibudelli, Stanley Ritchie, Alfredo Bernardini, Ottavio Dantone, Erich Höbarth, Rachel Podger, Jos van Immerseel. He has appeared on European radio and TV (RAI, ORF, RDF Germany, RDP Antena2 Portugal, RSI.ch), and has recorded for Nuova Era (Italy), Opus 111 (France), Accent, Alpha Classics.

In 2000 he founded his own Ensemble Cordia, with whom he enjoys working on and performing “forgotten” works as well the significant masterpieces of the baroque and classical periods. He has made solo appearances at the Vienna Konzerthaus, the Settimane Musicali di Stresa and Bachfest Leipzig, I Concerti del Quirinale-Rome, Utrecht Early Music Festival. As principal cello with the Belgian period instrument orchestra Anima Eterna Stefano Veggetti has toured extensively throughout Europe and Mexico and taken part in Jos van Immerseel’s Schubertiade project recording Schubert Arpeggione sonata and Troute quintet with Midori Seiler and Jos van Immerseel.

Since autumn 2016 he has been the artistic director of Barockakademin Göteborgs Symfoniker (BAGS), the baroque branch of the Gothenburg Symphony Orchestra. Teaching occupies an important place in Veggetti’s musical activities. For more than a decade he taught baroque cello at the Verona Conservatoty and gives various masterclasses across Europe. In 2000 he founded the Academy of Ancient Music in Bruneck and is still the artistic director. 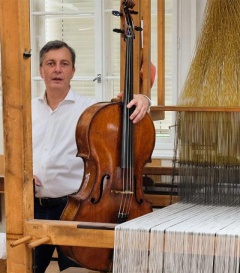