Tours with the SCO have led Robin Ticciati through Europe and to Asia. In the autumn of 2016 he toured with the London Philharmonic Orchestra and Anne-Sophie Mutter, performing concerts at Vienna’s Musikverein, the Berlin Philharmonie, the Gasteig in Munich and the Théâtre des Champs-Élysées in Paris. In January 2019, he could be heard with the Chamber Orchestra of Europe »in memoriam Claudio Abbado« in Berlin, Hamburg, Cologne und Salzburg. In the season 2019-20 he conducted an Asia tour with the DSO, namely a residency in Tokyo and concerts in China, followed by other guest appearances, for instance in the Concertgebouw Amsterdam. In the season 2020-21 season he will perform with the orchestra on a tour to Switzerland as well as at the Royal Albert Hall London, the Elbphilharmonie Hamburg and the Vienna Konzerthaus, among others.

Numerous CD recordings with Robin Ticciati have been released by Linn Records, including Haydn symphonies, two Berlioz albums and a complete recording of Schumann’s and Brahms’s symphonies with the SCO, as well as Berlioz’s ‘L'Enfance du Christ’ with the Swedish Radio Symphony Orchestra. These were all enthusiastically received by the critics and won numerous awards. Also with Linn Records, Robin Ticciati and the DSO presented highly acclaimed recordings of works by Bruckner, Debussy, Duparc, Duruflé and Fauré. In autumn 2020 another recording will be released, with tone poems and songs by Strauss. Ticciati’s discography also comprises Dvořák’s Ninth Symphony, Bruckner’s Mass in F minor and a Brahms recording with the Bamberger Symphoniker and the Choir of the Bayerischer Rundfunk (Tudor), as well as a number of opera recordings for Opus Arte and the house label3 of the Glyndebourne Festival.

Robin Ticciati was born in London in 1983 and trained first as a violinist, pianist and percussionist. He played in the National Youth Orchestra of Great Britain until turning to conducting at the age of 15. His mentors and patrons include Sir Colin Davis and Sir Simon Rattle. In 2014 he was appointed the ‘Sir Colin Davis Fellow of Conducting’ at the Royal Academy of Music in London.

Robin Ticciati was recently awarded an OBE for services to music in the Queen’s Birthday Honours. 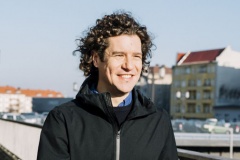