The Orchestra of the Americas

The Orchestra of the Americas is a pan-American symphony of top musicians, ages 18 to 30, representing 25+ countries in the Western Hemisphere. The orchestra’s Mission is to empower rising musical leaders to transform lives across the Americas and beyond. With more than 5,000 musicians entering the audition process each year, the 80-member ensemble ranks among the most competitive music platforms in the world. Full scholarships ensure the greatest caliber of artistry possible. The Season Centerpiece is a July & August residence and concert tour hosted each year in different regions of the world.

The impact of The Orchestra of the Americas stretches far and wide. It has reached millions through live performances, television and radio broadcasts, recordings, print media, and documentary films. Participants return home to share knowledge with their communities, and win jobs in the most prestigious institutions around the world. The orchestra serves as a model for countless national and regional music initiatives worldwide.

The Orchestra of the Americas is an initiative of The OA Group (www.theoagroup.org), which includes The Global Leaders Program (www.globalleadersprogram.com) & Music In Action Journal (www.musicinaction.org). The Orchestra of the Americas was created in 2002, originally as The Youth Orchestra of the Americas, by VISIÓN Inc in partnership with the New England Conservatory. The orchestra’s founding was inspired by pioneering work of figures including Jorge Peña Hen (Chile), Ana Milena Muñoz Gómez (Colombia), Oscar Arias (Costa Rica), José Antonio Abreu (Venezuela), and others throughout the Americas, to give the platform of the symphony orchestra renewed purpose at the epicenter of social transformations in diverse, underprivileged communities. The organization was established by founding chairman Hilda Ochoa-Brillembourg, vice-chairman Mark Churchill, and vice-chairman José Antonio Abreu, in partnership with The David Rockefeller Center for Latin American Studies at Harvard University, the Organization of American States, and the Inter-American Development Bank. Early musical supporters include Yo-Yo Ma, Carlos Miguel Prieto, Plácido Domingo, Gustavo Dudamel, and Benjamin Zander, among others. Since its inaugural tour, The Orchestra of the Americas has performed more than 400 concerts for audiences in 35+ countries throughout the Americas, Europe, and Asia. The Orchestra has reached over 15 million people through television & radio broadcasts, recordings, print, and television – including three feature-length documentary films dedicated to the Orchestra. The Orchestra has released a number of critically acclaimed commercial recordings with Plácido Domingo, Gabriela Montero, Philip Glass, and others, winning in 2015 a Latin Grammy Award for ‘Best Classical Album.’ 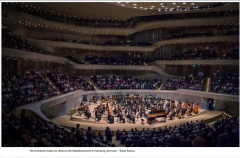