The Norwegian Soloists' Choir is an innovative young ensemble, steeped in a rich history. As one of Europe's leading chamber choirs, they perform spectacular concerts in Norway and abroad, in concert halls and churches, in caravans and in abandoned factory venues. The Norwegian Soloists' Choir consists of 26 hand-picked, professional singers who have a tremendous ability to blend their voices, resulting in a highly distinctive choral expression. Along with its celebrated artistic leader Grete Pedersen, the choir achieves ambitious artistic goals through constant development.

Concerts featuring the Norwegian Soloists' Choir give listeners a chance to experience new compositions, folk music and classics from Nordic and international choral literature – often in unexpected combinations. The choir organises its own series of concerts, in addition to appearing at leading festivals in Norway and abroad. The choir has a number of critically acclaimed albums and distinctions to its credit.

Since its inception in 1950, the Norwegian Soloists' Choir has carved out a unique position in Norwegian music. Knut Nystedt conducted the choir for no fewer than 40 years before Grete Pedersen took over in 1990. In autumn 2019, Yuval Weinberg will raise his baton as the choir's first guest conductor.

In 2018, the album Bach: The Motets received the prestigious French prize "Diapason d'or de l'année". This was the third time the choir has been awarded the Diapason distinction. The choir's recording of Meins lebens licht was nominated for a Spellemann Award, often referred to as the Norwegian equivalent to a Grammy. The choir has also been named "Performers of the Year" by the Norwegian Society of Composers.

In 2009, as the first choir in the Nordic countries, the Norwegian Soloist Choir was inducted into Tenso, an exclusive network of Europe's foremost chamber choirs. The choir is also a member of NTO (the Association of Norwegian Theatres and Orchestras), the Norwegian Choir Association and the Ultima Foundation. 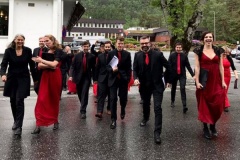