The John Wilson Orchestra was formed by British orchestral conductor John Wilson in 1994. It is a symphonic orchestra that includes a big jazz band. It performs the original arrangements of MGM musicals and the works of Rodgers and Hammerstein. The orchestra has performed annually in the BBC Proms summer festival since 2009.

The John Wilson Orchestra has been acclaimed for showing how "authentic period performance" extends to screen musicals. In an interview with Rebecca Franks for the BBC Music Magazine prior to the 2010 Proms season John Wilson explained how the specific make-up of the orchestra reflects this purpose:

The orchestra’s been together a good 15 years and its make-up is very specific. It’s modelled on the old contract movie orchestras in America. And that's basically the combination of a dance-band brass, rhythm and saxophone section, so four trumpets, four trombones, five saxes who all double, and a rhythm section, who are all very specific specialists in this style. And then on top of that you have a woodwind and French horn section.

But I think the key thing is getting the right string players. It has to be a very high octane, high gloss, soloist sort of player. The string sound isn’t blended down, it’s blended up. You play up to the best. It’s a very in-your-face, expensive sort of string sound and it takes a lot of playing. You have to have the best players, but we're spoilt in this country for terrific orchestral performers. 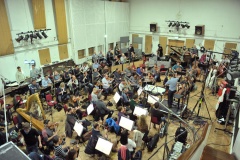