Highlights of Maestro Stenz’s 2016-2017 season with the Netherlands Radio Philharmonic Orchestra include varied programs of Mussorgsky, Raaff, Diepenbrock, Szymanowski, Zuidam, and a John Adams arrangement of Busoni, in addition to Lizst, Rachmaninoff, Mozart, Wagner, Schumann, and others. North American engagements include the Baltimore Symphony Orchestra in February with pianist Gabriela Montero and in May with pianist David Fray, and guest conducting includes appearances with the San Diego Symphony Orchestra in March with Grammy Award-winning violinist Augustin Hadelich, and the Cincinnati Symphony Orchestra in May. Internationally, Stenz’s touring schedule takes him across four continents, conducting the São Paulo and Bern symphony orchestras, the Hallé Orchestra in Manchester and Leeds, the Salzburg Mozarteum Orchestra, and the Yomiuri Nippon Symphony Orchestra on a tour throughout Japan performing Beethoven’s Symphony No. 9.

The previous season led Markus Stenz all over the world, from São Paulo to Shanghai. He conducted several premières and world premières, including the German premiere of a Cello Concerto by Pascal Dusapin with the cellist Alisa Weilerstein, as well as an orchestral work by Dieter Ammann with the Tonhalle-Orchester Zurich in June 2016.

Trained at the School of Music in Cologne under Volker Wangenheim and at Tanglewood with Leonard Bernstein and Seiji Ozawa, Markus Stenz has held the positions of Artistic Director of the Montepulciano Festival (1989 – 1995), Principal Conductor of the London Sinfonietta (1994 – 1998) – one of the most renowned ensembles for contemporary music. As Artistic Director and Chief Conductor of the Melbourne Symphony Orchestra (1998 – 2004) Markus Stenz broadened his repertoire and established his career as an international conductor.

He made his debut as an opera conductor at La Fenice in Venice and has since conducted many world premieres and first performances including Henze’s Das Verratene Meer in Berlin, Venus und Adonis at the Bavarian State Opera in Munich and L’Upupa at the 2003 Salzburg Festival. Markus Stenz has appeared at many of the world’s major opera houses and international festivals including La Scala in Milan, La Monnaie in Brussels, English National Opera, Lyric Opera of Chicago, San Francisco Opera, Stuttgart Opera, Frankfurt Opera, Glyndebourne Festival Opera, Edinburgh International Festival, the Bregenz Festival (with the world premiere of Solaris by Detlev Glanert in July 2012) and Salzburg Festival.

His comprehensive discography includes many award-winning productions. His recording of the complete symphonies of Gustav Mahler with the Gürzenich Orchestra (Oehms Classics), for instance, was given an enthusiasic international reception, and was selected among the "Quarterly Critic's Choice" issued by the German Record Critics' Award Association with the recording of Mahler's 5th. The discography was recently enlarged by the addition of recordings of the world premiere of James MacMillan’s St. Luke Passion and the Dutch première of K. A. Hartmann’s Simplicius Simplicissimus (Challenge Classics) with the Radio Filharmonisch Orkest as well as various Schönberg-recordings with the Gürzenich-Orchestra Cologne.Schönberg’s Gurre-Lieder on Hyperion has been awarded with a Gramophone Classical Music Award in September 2016.

Markus Stenz has been awarded Honorary Fellowship of the Royal Northern College of Music and the “Silberne Stimmgabel” (Silver Tuning Fork) of the state of North Rhein/Westphalia. 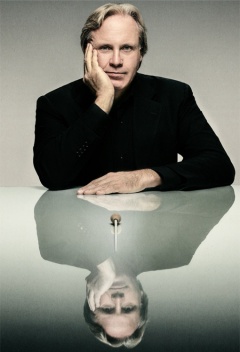