Guitarist Ozan Sarıtepe (1982-Turkey) started playing the classical guitar at the age of 15. Nowadays he is active as recitalist, soloist and chamber musician. His virtuoso repertoire, very musical and exciting, with traditional, ethnic and contemporary influences, includes works by Turkish and Balkan composers as well as music from the Baroque era to the present century. His passionate and powerful interpretations frequently receive ovations from the audiences.

He studied successfully at the Rotterdam Conservatoire with Prof. Jorge Oraison gaining his bachelor degree. Later on he studied his masters at the Royal Conservatoire of The Hauge, The Netherlands, under the guidance of Prof. Enno Voorhorst. Same period he studied at the International Koblenz Guitar Festival & Academy, Germany with Prof. Aniello Desiderio receiving the highest possible mark as soloist.

As one of the most promising Turkish guitarist of his generation, his achievements were awarded by important scholarships from The Netherlands and Germany. Such as; prestigious Nuffic Huygens programme, Prins Bernhard Cultuurfonds scholarship, Dr. Klaus Heinen scholarship for chamber music.

During his studies and since his graduation he had been invited to play and give master classes in concert halls, festivals and conservatories in Europa, Turkey and Cypress. Ozan Saritepe had been invited to play as a soloist, the famous Concierto de Aranjuez with Staatsorchester Rheinische Philharmonie and Toonkunstorkets Leiden. In his full Koblenz debut with Staatsorchester Rheinische Philharmonie during sixteenth international Koblenz Guitar Festival, He shared the stage with the world famous classical guitarists Alvaro Pierri and Shin-ichi Fukuda.

His Interpretation of Concierto de Aranjuez by Joaquin Rodrigo, was described as ‘… the Turkish guitarist Ozan Saritepe gave his very successful performance of Rodrigo’s Concierto de Aranjuez with the Staatsorchester Rheinische Philharmonie conducted by Rasmus Bauman. His phrasing was very musical and he was focused…’ by Theresa Wassily Saba , Classical Guitar Magazine, London.

In addition Ozan Saritepe appeared on many radio and TV programs such as; RTV Rijnmond (The Netherlands) and Canal A, TRT Muzik, TRT 4 (Turkey)…

In 2005 he recorded a CD  with tango quintet Passion for Tango which includes works by Astor Piazzolla and Richard Galliano.

Besides his concert and teaching schedule he had been writing articles about guitar technique on Guitar Magazine (Gitar Dergisi) in Turkey. 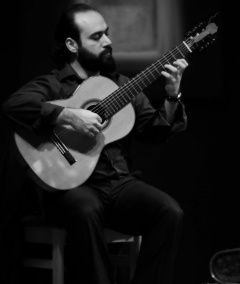