“…The Dutch violinist impressed not only with her flawless technique and intensity of tone, but also with her mastery of a broad palette of expressive means…” Rheinische Post

Dutch violinist Frederieke Saeijs drew international attention by winning the 2005 Long-Thibaud International Violin Competition in Paris. After taking away the First Grand Prize as well as several special distinctions, she received concert invitations from all over the world.

Concert tours have brought Ms Saeijs to North and South America, Asia, the Middle East, and many countries in Europe. She performed live for Radio France in Montpellier and Paris, for Radio Suisse Romande in Switzerland and for Radio 4 in The Netherlands.

Frederieke Saeijs was Artist in Residence at both the Dr Anton Philips Hall in The Hague and the Dutch Music Summer in The Netherlands. To the Canadian Festival of the Sound she was invited as Stockey Young Artist.

In 2007 she had the honor to perform Bach’s Chaconne in the presence of Her Majesty Queen Beatrix of The Netherlands at the Royal Palace in The Hague.

Ms Saeijs plays the ‘Ex-Reine-Elisabeth’ violin by Pietro Guarneri (Venice, 1725), kindly lent to her by the Dutch National Foundation for Musical Instruments.

Besides performing, Ms Saeijs is dedicated to teaching young passionate musicians.
Currently she is Professor of Violin and Chamber Music at the Universidad Alfonso X El Sabio in Madrid. Previously she was a member of the Faculty at the Royal Conservatoire in The Hague.
Furthermore she taught violin master classes in Germany, Spain, Switzerland, Taiwan, The Netherlands and the USA.
For the German organization ‘Rhapsody in School’ she regularly visits German elementary and secondary schools to teach and play together with the students.
Also, she was a member of the Jury in The Netherlands at the annual Princess Christina Competition for young talented musicians, and the Davina van Wely Violin Competition.

Born and bred in The Hague (The Netherlands), the young Frederieke started her violin education with Stieneke Voorhoeve according to the Suzuki method. After entering the Royal Conservatoire in her hometown at age thirteen, she studied consecutively with professors Mireille van der Wart, Lex Korff de Gidts, Peter Brunt and Jaring Walta. Scholarships allowed her to attend additional masterclasses by Herman Krebbers and Boris Kuschnir.

After completing her Bachelor’s (’02) and Master’s (‘04) degrees with the highest marks and a special distinction for ‘creative musicality’, Frederieke Saeijs continued studying the violin at the Indiana University Jacobs School of Music in Bloomington (USA) with professor Mauricio Fuks. She concluded her study years with the Performer Diploma (’07), and Artist Diploma (’08), and was given the Performer’s Certificate (’08) ‘in recognition of outstanding musical performance.’

In 2005, while studying in Bloomington, Saeijs won the International Violin Competition Long-Thibaud in Paris. Besides the First Grand Prize, she was awarded extra prizes for the best interpretations of the violin concerto and the mandatory contemporary work. Also she received special disctinctions from the Orchestre National de France and the Conservatoires of Paris. 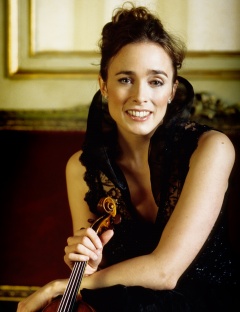