Since our official founding in 1891, as the Scottish Orchestra, we have worked with some of the world’s most respected conductors and soloists – among them Gustav Holst, Richard Strauss, Artur Rubinstein, Aaron Copland, Luciano Pavarotti and Elmer Bernstein – and we have played a crucial role in shaping the musical life of the nation.

Our early Principal Conductors included such eminent figures as John Barbirolli, George Szell and Walter Susskind, under whose tenure we became a permanent, year-round ensemble and changed our name (in 1950) to the Scottish National Orchestra.

The figure with arguably the profoundest influence on our activities was Sir Alexander Gibson, Principal Conductor for a remarkable 25 years from 1959 to 1984, who launched a pioneering Sibelius series and led the Orchestra on acclaimed tours of Europe and North America. More recent figures Neeme Järvi, Bryden Thomson, the recently departed Walter Weller, Alexander Lazarev and Stéphane Denève are remembered fondly for their huge contributions to the Orchestra in live concerts, acclaimed recordings and extensive tours.

We continued to provide exceptional concerts despite the challenges of the Depression of the 1930s, and we successfully doubled our number of Season concerts from 27 to 53 during the Second World War, even under constant threat from air raids. We performed at the first Edinburgh International Festival in 1947, and for the inaugural production of the newly established Scottish Opera in 1962. We survived a devastating fire at our St Andrew’s Halls headquarters the same year, moving first to City Halls in 1968, then to Henry Wood Hall in 1979.

HM The Queen became our Patron in 1977, prompting a name change in 1991 to the Royal Scottish National Orchestra. We performed at the opening of Edinburgh’s Scottish Parliament building in 2004, and our special status in Scottish cultural life was cemented in 2007 when we were recognised as one of the nation’s five national performing companies, supported directly by the Scottish Government.

We are proud of our 125-year history of exceptional performances in Scotland, and of taking the best in Scottish music making to international audiences. We look forward to the fresh opportunities that our new home in the RSNO Centre offers to us, and to the people of Scotland and beyond, over the next 125 years. 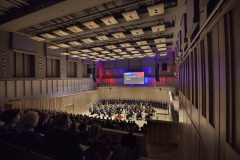