On the 13th of September, 2010, RUSQUARTET performed a world premiere of Samuel Feinberg’s two-part string quartet. This outstanding Soviet pianist and teacher became famous for his piano compositions. Among them – three concerts for the piano with orchestra, 12 piano sonatas, suites, fantasies, four preludes, as well as a few vocal cycles. The score for the quartet has been found recently and the organizers of the festival commissioned RUSQUARTET to perform it. The concert took place at the Rachmaninov Hall of the Moscow Conservatory under the framework of the Festival devoted to Samuel Feinberg’s 120th anniversary.

The Dutch composer Louis Andriessen highly acclaimed the professionalism of the team, when RUSQUARTET performed all of his five quartets in March 2009 at the Vancouver festival dedicated to the 70th anniversary of the composer.

RUSQUARTET performs in the best Moscow concert halls, including the Great, the Small, and the Rachmaninov Halls of the Moscow State Conservatoire. In 2015 the ensemble has performed at the prestigious Musikverein in Vienna.

RUSQUARTET took part in the concert in honor of Prince Edward, Earl of Wessex, who gave its performance the highest praises.

Since 2016 quartet in residence in ORLANDO music festival.

The repertoire of the quartet is extensive and diverse, it embraces music of different styles and epochs.

RUSQUARTET performs lecture-concerts in schools and orphanages for the children who study music professionally, as well as the children who simply like music. Such programs help get a priceless experience in performing chamber music when the main goal of the performers is to interest children in music – a major performing art – by making it accessible and exciting. 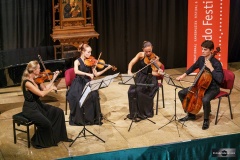