Founded nearly 70 years ago, the RIAS Chamber Choir today sets standards in nearly all domains of musical culture – from celebrated historically informed interpretations of the Renaissance and the Baroque through works of Romanticism, which not infrequently lead listeners to a new conception of the 19th-century sound world, up the most demanding world premieres, in which the possibilities of contemporary vocal music are sounded out and newly defined. Together with the “Association of Sponsors and Friends of the RIAS Chamber Choir”, it has developed new concert forms and approaches to intermedial music-making in the “Forumkonzert” series set in unusual locations in Berlin. For some time now, the Forumkonzert series is no longer an insider’s tip – it enjoys cult status.

A vanguard musical position has given rise to a sense of cultural and social responsibility which the RIAS Chamber Choir assumes passionately and intensively. “KlasseKlänge” workshops, school choir mentoring programmes, concert introductions done by students, assistance to students in the DIRIGENTENFORUM or the Academy for Advanced Vocal Study are only a few aspects of an extensive education and outreach programme. On concert tours through Europe and to important music centres worldwide, the RIAS Chamber Choir serves as a cultural ambassador of Germany and, with its guest performances, continues the valuable legacy of german choral culture into the 21st century.

In brief: The RIAS Chamber Choir is one of the ten best choirs in the world (Gramophone, 2010)

Leading artistic personalities of the recent past and present have shaped and left their mark on the RIAS Chamber Choir during their chief conductorships. Uwe Gronostay (1972-1986) laid the foundations for historical performance practice and developed the chamber choir sound, in equal measure lean and vigorous, for which the choir is today exemplary. Marcus Creed (1987-2001) achieved the increasing internationalisation of the RIAS Chamber Choir, particularly through the coupling of early and contemporary music. Daniel Reuss (2003-2006) placed an emphasis on the classical modern and strengthened connections with cooperating partners at home and abroad. Hans-Christoph Rademann, who took over the post of chiefconductor in 2007 and held it up to summer of 2015, broadened the content and tonal range of expression, devoting particular attention to central german music history of the 17th to 19th century.

Numerous awards and prizes document the artistic journey and the high international reputation of the RIAS Chamber Choir: The German Record Critics’ Award, the Gramophone Award, the Choc de l’annee, the ECHO Klassik or the Prix Caecilia are only a few of many honours. In 2012 the RIAS Chamber Choir received the “Nachtigall” honorary prize from the Jury of the German Record Critics’ Award.

An enduring and fruitful collaboration binds the choir to René Jacobs, the Akademie für Alte Musik Berlin, the Freiburg Baroque Orchestra and the Munich Chamber Orchestra under Alexander Liebreich. In addition, the RIAS Chamber Choir works together with conductors such as Sir Simon Rattle, Yannick Nézet-Séguin, Andrea Marcon, Thomas Hengelbrock, Florian Helgath and Ottavio Dantone. Starting with the 2017-18 season, Justin Doyle will be Principal Conductor and Artistic Director of the RIAS Kammerchor.

The RIAS Chamber Choir is an ensemble of the Rundfunk Orchester und Chöre GmbH (roc berlin). Other partners are Deutschlandradio, the Federal Republic of Germany, the State of Berlin and the Rundfunk BerlinBrandenburg broadcasting company. 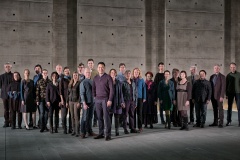