Quartonal is currently one of the most sought-after vocal ensembles in Germany. The four young singers from northern Germany charm their audiences with their vast repertoire, attention to the smallest musical detail and refreshing witticism. Their trademark is their acutely harmonious sound that transcends every musical genre.

Mirko Ludwig (Tenor), Florian Sievers (Tenor), Christoph Behm (Baritone) and Sönke Tams Freier (Bass) began singing in the boys’ choirs Chorknaben Uetersen and Neuer Knabenchor Hamburg. Shortly after the formation of the ensemble in 2006, Quartonal won first place at the German National Choir Competition (Dortmund) in the Vocal Ensemble category. In 2012, Quartonal was awarded audience and jury awards at the A cappella contest in Leipzig (Germany) and the Tolosako Abesbatza Lehiaketa choir competition in Tolosa (Spain).

In 2013 Quartonal debuted their album Another Way with Sony Classical. The album incorporates music by English composers of the 20th and 21st century. Simple folksong arrangements, for example “The Vagabond” by Ralph Vaughan Willams, contrast with the romantic pieces, such as Alec Rowley’s sea cycle “Full Tide”. Finally, three commissioned compositions by Philip Lawson, Graham Lack and Thomas Hewitt Jones introduce the album into the 21st century.

Everytime, Quartonal’s second album with Sony Classical presents a collection of international pop and folksongs. The majority of these arrangements were written specifically for this unique quartet. In addition to the popular pop songs, such as “Hard to say I'm sorry” by the American band Chicago or the famous German song “Über den Wolken” by Reinhard Mey, the recording also contains the simple German folk song “Der Mond ist aufgegangen” and a highly entertaining version of “La Cucaracha”. The northern German song “Fresenhof” is not only a homage to the birthplace of the ensemble, but also a piece that they have sung since their very first performance.

Quartonal also gives workshops around the world for choirs, vocal ensembles and conductors. 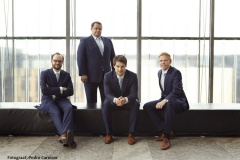