Violinist Joseph Puglia is known for his energetic performances of contemporary music as well as sensitive interpretations of the standard repertoire. He currently enjoys a varied career as a soloist, chamber musician, concertmaster, and teacher. A native of New York City, he has resided in The Netherlands since 2009. Since moving to The Netherlands, he made his solo debut in the Amsterdam Concertgebouw, which was praised in the newspapers as an “Exceptional Debut” (NRC Handelsblad), saying that he “Brought the Hall to a Boil” (De Volkskrant). Highlights from Joseph’s upcoming season include concerti performances with Asko|Schoenberg and Sinfonietta Riga, chamber music performances with Pierre-Laurent Aimard, Marie-Luise Neunecker, Liza Ferschtman, and Miklos Perenyi, and a residency at the Amsterdam Muziekgebouw which will include six concerts, talks, and workshops with repertoire ranging from Bach to the present day.

Joseph is increasingly known as one of the top interpreters of 20th and 21st century music, and in recent seasons has performed concerti by Joey Roukens and Kate Moore (both written for him), Anders Hillborg, Jan van Vlijmen, Arvo Pärt, Klas Torstensson, Edison Denisov, and more. He has developed an inspiring partnership with conductor Reinbert de Leeuw, with whom he has collaborated in performances of violin concerti by John Adams, Gyorgy Ligeti, and Kaija Saariaho in Europe and the US. Joseph also performs regularly as the concertmaster of the Asko|Schoenberg ensemble, the leading Dutch ensemble for contemporary music. He has given countless premieres in Europe, the US, Asia, and Australia, and collaborated with many leading composers including John Adams, Heinz Holliger, Oliver Knussen, Kaija Saariaho, Jörg Widmann, Anders Hillborg, and Louis Andriessen.

In 2014, Joseph created a project dedicated to promoting the music of Luciano Berio. For the Berio project, he has recorded a CD for the Attacca label, given performances and masterclasses at leading conservatories, institutions, and concert halls throughout Europe and in the US; and he is currently preparing bonus recordings for special release on his website. The CD has been released to highest acclaim, and was hailed as “Dizzyingly good” (Luister magazine) and “Spectacular” (Opus Klassiek). It includes Berio’s Sequenza, Corale (with the New Utrecht Philharmonic), Due Pezzi (with pianist Ellen Corver), and 34 Duets for two violins. Joseph collaborated on each duet with a different violinist, making it the first recording of these pieces as Berio intended them to be played: with as many violinists as possible of all ages and abilities, from 7 year old students to Joseph’s own former teachers.

As a chamber musician Joseph has collaborated with members of the Juillliard and Brentano String Quartets, Osiris Trio, Brooklyn Rider Quartet, Reinbert de Leeuw, Vera Beths, and Gordan Nikolic, among others. From 2015-2017 he created, curated, and performed in a concert series at the Gemeentemuseum in The Hague, which drew connections between current museum exhibitions and chamber music masterworks, and provided an opportunity to display the museum’s extensive instrument collection, which is currently in storage. He has recorded chamber music for the Sony Classical, Attacca, and Hungaroton labels, and his performances have been broadcast on television and radio programs in the US, Europe, and Australia. He has performed in many chamber music festivals throughout the US and Europe, such as IMS Prussia Cove (UK), Lucerne (Switzerland), Kneisel Hall (USA), Festival dei dui Mondi (Italy), Delft (Netherlands), Sacrum Profanum (Krakow), Festival Musique de Chambre Giverny (France), Musique a Marsac (France), and the Tiberius Festival (Romania).

Joseph began the violin at age 4 and studied with Louise Behrend at the School for Strings and Juilliard’s Pre-College division in New York. In 2002, he was accepted to Juilliard’s college division with a full scholarship where he studied under Robert and Nicholas Mann. He received his Master of Music degree with the highest possible marks at the Royal Conservatory in The Hague in 2008, working with Vera Beths. He has also received coachings and musical inspiration from Anner Bylsma, Barbara Hannigan, Anssi Karttunen, Thomas Riebl, David Takeno, and members of the Alban Berg, Hagen, Juilliard, and Guarneri Quartets. Joseph is currently on the violin faculty at the Royal Conservatory of the Netherlands, in The Hague. 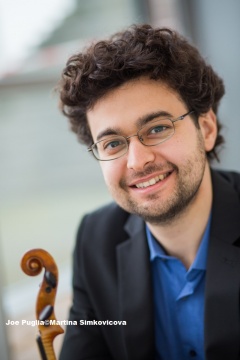