Winner of the “Raymond E. Buck” Jury Discretionary Award at the 2017 “Van Cliburn” International Competition, 24-year-old Italian pianist Leonardo Pierdomenico is also a first prize winner at the 2011 “Premio Venezia” Piano Competition held in “La Fenice” Opera House and a semifinalist at the 2016 “Queen Elisabeth” International Piano Competition. His semifinal performance of Chopin’s Ballade in g minor was included in the CD box with the best of 2016 “Queen Elisabeth” competition.

He has performed with many prominent orchestras, including the Fort Worth Symphony Orchestra, the Orchestre Royal De Chambre de Wallonie, La Fenice Symphony Orchestra, among the others, collaborating with such esteemed conductors as Nicholas McGegan, Paul Meyer and Diego Matheuz.

In 2015 Leonardo was one of the six pianists selected to compete for the “Arturo Benedetti Michelangeli” Prize and to participate to the exclusive masterclass held by M° Daejin Kim at the prestigious Eppan Piano Academy. He was also named Fellow of the prestigious 2016 Music Academy Of The West Festival in Santa Barbara, California, having the opportunity to perform, work, and collaborate with Guest Artists like Jeremy Denk, Jerome Lowenthal, Jean-Yves Thibaudet, Julian Martin and Leon Fleisher.

When not at the piano, Mr. Pierdomenico enjoys painting and sports. 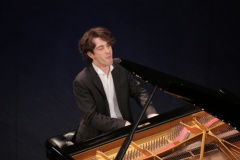