What the artistic world and audiences find so enchanting about Marlis Petersen is an ability to combine a voice of rare crystal clarity and brightness with an alert presence that enables her to completely identify with all her roles on the stage.

Born in Germany, Petersen had already trained in the piano and traverse flute before she decided to dedicate herself to the instrument which today inspires her audience. At the conservatoire, in Stuttgart, she studied to become a high school music teacher whilst being instructed in classical singing by Sylvia Geszty. Yet her ever-restless spirit urged her towards another passion. She trained in jazz-dance and tap-dancing at the New York City Dance School in Stuttgart, shortly after earning engagements in show business. Despite this she stayed connected to the classical repertoire as she continued further studies in Opera and Contemporary Music and three years after being a prize winner in the operatic category at the VDMK competition in Berlin in 1990, she also won an award in the category of Musical-Chanson-Song.

In 1994, the soprano began her professional career at the Nuremberg Opera with roles like Ännchen (“The Free-Shooter”), Blonde ("The Abduction from the Seraglio"), Oscar ("A Masked Ball"), Adele ("The Bat"), Zerbinetta ("Ariadne on Naxos") and the Queen of the Night ("The Magic Flute").

Following, between 1998 and 2003, Marlis Petersen joined the Deutsche Oper am Rhein Düsseldorf-Duisburg where she made many successful appearances in roles like Susanna (“The marriage of Figaro”), Morgana ("Alcina"), Norina ("Don Pasquale"), Viola ("Twelfth Night"), Sophie ("The Knight of the Rose"), Marie ("The Daughter of the Regiment") and Bystrouška ("The Cunning Little Vixen"). Later on she triumphed as Konstanze in Mozart’s “The Abduction from the Seraglio” in Frankfurt, Brussels and Aix en Provence.
A role which has marked her career is Alban Berg´s heroine Lulu.

After performing it in Nuremberg, Kassel and Dusseldorf, she gave her Vienna State Opera debut with this role in 2002. Critics characterised her as the ideal child-woman that guides her voice accurately through all the perils of the score - agile and brilliant in the high tessitura. She has also performed Lulu in Peter Konwitschny´s well-recognized production in Hamburg (2003), at the Lyric Opera Chicago (2008), the Metropolitan Opera New York (2010), in Megaron, the Athens Concert Hall (2005) where she also appeared as Donna Clara in “The Dwarf” by Zemlinsky (2007) and Massenet´s “Thais” (2009). After Lulu number 9 at Bavarian State Opera in Munich she announced her ever last Lulu at the MET in William Kendtrige new production in the autumns of 2015. A cycle of 18 years and 10 production has closed!

Marlis Petersen has performed at the Bregenz Festival the page boy Oscar (2000), as Adele at La Bastille in Paris (2000), at the MET New York (2005) and at the Lyric Opera of Chicago (2007). In September 2002 she mesmerised London audience at Covent Garden as Zerbinetta in a sparkling series of Richard Strauss’ “Ariadne on Naxos”.

In the year 2003 she performed her Bavarian State Opera debut with Mozart’s Queen of the Night followed by Adele in the succeeding seasons. At the Geneva Grand Theatre she appeared as the Nightingale in Walter Braunfels’ “The Birds” (2004).

In 2006 she performed for the first time at Salzburg Festival Elisa in Mozart’s “Il Re Pastore” followed by Susanna in “The Marriage of Figaro” (2008), a role she successfully performed at the L.A. Opera conducted by Plácido Domingo (2010).

With the new role Zdenka in “Arabella” she appeared at the Munich Opera Festival in 2008.

After performing Zerbinetta in 2005 at the Berlin State Opera she had a splendid comeback to the house as Angelica in Haydn´s opera “Orlando Paladino” in the year 2009.

In March 2010 she jumped in for the opening night of Hamlet in New York with only two days of rehearsals what made the audience and media praise her to be the savior of the Metropolitan Opera.

Marlis Petersen is a sought-after soprano for contemporary works. She performed at the world premiere of Manfred Trojahn´s “La grande Magia“ at the Semperoper in Dresden, Hans Werner Henze´s “Phaedra“ at the Staatsoper Berlin, "Hamlet" by Anno Schreier at Theater an der Wien and Aribert Reimann´s “Medea“ at the Vienna State Opera. For her interpretation of the latter role she was named “singer of the year 2010” by the highly acclaimed opera magazine Opernwelt, for the second time in her career, the first being in 2004 for her interpretation of Konwitschny/ Metzmacher´s “Lulu” in Hamburg.

In January 2011 Marlis Petersen made her successful debut as Violetta in Peter Konwitschny´s new production of “Traviata” at the Graz opera and in summer 2011 was praised for her performances as Marguerite de Valois in the “Hugenots” at Brussels La Monnaie and as Susanna in the revival of the “Marriage of Figaro” in Salzburg. She recently impressed critics and audience performing all 4 roles ( Stella, Olympia, Antonia and Giulietta) in Les Contes D’ Hoffmann (Theather an der Wien, 2012). The MET New York invited her 2014 and 15 to perform Susanna in “the Marriage of Figaro” and a new production of "Lulu" designed by the artist William Kentdrige .

Her 9th production of Alban Bergs Heroine-opera Lulu at the Bavarian State opera brought Marlis Petersen a third time the title of the "singer of the year"!

Future engagements will take Marlis Petersen to the Teatr Wielki in Warsaw to give her debut as Marietta in Korngolds "Tote Stadt". Also in preparation is Maria Stuarda at Theater an der Wien and an "opera in concert"-Tour with Rene Jacobs and Freiburg Baroque orchestra with Beethoven´s "Leonore"!

Looking forward, she has chosen to dedicate herself more to the genre of the LIED. Plans for recordings, recitals and concerts will bring her onto world-known podiums such as Wigmore Hall London, Concertgebouw Amsterdam, Konzerthaus Vienna and Berlin, Schubertiade Schwarzenberg and Grafenegg.

Living in Greece in a time of crisis, Marlis also engages in humanitarian projects to help people and animals in need. Find Sopranissifee! 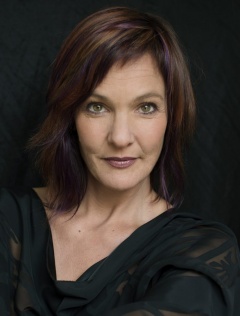