The Pavel Haas Quartet was founded in 2002 by the violinist Veronika Jarůšková and the violist Pavel Nikl, who was a member of the ensemble until 2016, when he left due to family reasons. Yet their collaboration has continued – Pavel Nikl has been the ensemble’s permanent guest for string quintet performances. Between 2004 and 2012, the second violin was played by Kateřina Gemrotová Penková, Marie Fuxová and Eva Karová Krestová. In 2016 and 2017, the viola was played by Radim Sedmidubský.

Following their victory in the Prague Spring Festival Competition and Premio Paolo Borciani in Reggio Emilia, Italy in 2005, the Pavel Haas Quartet soon established themselves as one of the world’s most exciting contemporary chamber ensembles. Performing at the most renowned concert venues around the globe, the PHQ have to date recorded six critically acclaimed CDs, which have received numerous prestigious awards. The ensemble members studied with Milan Škampa, the legendary violist of the Smetana Quartet.

In 2007, the European Concert Hall Organisation (ECHO) named the Pavel Haas Quartet one of its Rising Stars, following which they were afforded the opportunity to give numerous high-profile concert appearances all over the world. Between 2007 and 2009, the Pavel Haas Quartet held the title of BBC New Generation Artist. In 2010, the ensemble was granted a classical music fellowship from the Borletti–Buitoni Trust.

In the 2019/20 season the Quartet will return to major venues including Tonhalle Zürich, Wigmore Hall London, Philharmonie Luxembourg, Stockholm Konserthuset, Società del Quartetto di Milano and festivals such as the Schubertiade. They will return to Amsterdam Muziekgebouw to perform three concerts at the String Quartet Biennale in January 2020 and will embark on their first tour to Israel with performances in Jerusalem, Tel Aviv and Haifa. Further tours will be to the US and Canada as well as to Asia, where they will return to NCPA Beijing and give their debuts in Hong Kong and Singapore. 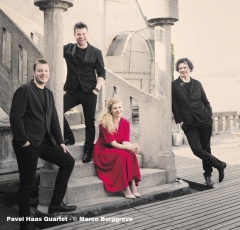