Olga Pashchenko is one of today’s most versatile performers on the keyboard, from organ and harpsichord to fortepiano and modern piano. In her worldwide performances she demonstrates a passionate personality, virtuosity, wealth of color and sensitivity towards the broad repertoire that she performs on these different keyboards.

Having started her concert career at an early age — she gave her first piano recital in New York when she was 9 years old — Olga currently enjoys a busy career as a soloist, chamber musician and orchestral soloist. She performs in Germany, France, Belgium, the Netherlands, Italy, Switzerland, the USA and Russia, with a repertoire ranging from Bach on harpsichord to Beethoven on historical piano and Ligeti on modern Steinway. She is a regular guest at early and contemporary music festivals alike, including the Utrecht Early Music Festival (where she was artist in residence in 2016), the fortepiano festivals of Amsterdam, Zaandijk and Zutphen; the Maggio Musicale Florence and fortepiano series of Milan and Padua; AMUZ Antwerp, Concertgebouw Bruges, Juan March in Madrid and the Cité de la Musique in Paris, where she made her debut last year. Recent highlights include recitals at the Festspiele Potsdam Sanssouci, the Festival Musiq’3 in Brussels, and the festivals of Simiane-La Rotonde and Sable in France, as well as the Festival ‘Chopin and his Europe’ in Warsaw. Olga has been Hausmusikerin at the Beethoven-Haus in Bonn since 2012, where she gives regular recitals in the series ‘Bonngasse 20: music from Beethoven’s time’. As orchestral soloist, she has played Mozart concertos with the Orchestra of the 18th Century and MusicAeterna Perm under Teodor Currentzis; the Grieg Concerto with the Meininger Hofkapelle and double concerto from Dussek with Alexei Lubimov and Collegium 1704 under Vaclav Luks. in 2018 she performed and recorded a Dussek cd with Lubimov and the Finnish Baroque Orchestra.

Olga was born in Moscow in 1986, where she began her musical studies at the age of 6. She was a laureate at the all-Russian Young Pianists Competition when she was 7 years old and she entered the famous Gnessin Music School in Moscow, where she graduated with honors in 2005. She won a scholarship by the Russian Performance Art Fund and was a laureate at the International Gnessin Young Artists Competition and the International Beethoven Festival of Chamber Music. She continued her studies at the Moscow State Tchaikovsky Conservatory with Alexei Lubimov (fortepiano and modern piano), Olga Martynova (harpsichord) and Alexei Schmitov (organ), and graduated with honors in 2010. At the same time she graduated in linguistics at the Moscow State University. Olga was a postgraduate at the Moscow Tchaikovsky Conservatory with Alexei Lubimov (historical keyboards) and Konstantin Zenkin (on the interpretation of keyboard music from 15th to 19th century). She has studied fortepiano and harpsichord with Richard Egarr at the Conservatory of Amsterdam, where she received her master degree ‘cum laude’ in fortepiano in 2013 and harpsichord in 2014. She has recently been appointed as fortepiano professor at the Conservatory of Amsterdam.

Olga has made numerous radio and cd-recordings and she has played in several TV performances and a documentary. Her cd album ‘Transitions’, with works by Dussek, Beethoven and Mendelssohn, received wide critical acclaim, while her Beethoven solo album ‘Variations’ was issued on the Alpha label in 2015. Her next cd, also for Alpha, included three major piano sonatas by Beethoven, the Appassionata, Waldstein and Les Adieux.
‘Olga Pashchenko has an exceptional way with Beethoven.’ -Gramophone
‘How would Beethoven sound if you threw a molotov cocktail between the keys? It’s the inflammable temperament that distinguishes herself from the regular fortepiano player.’ - de Volkskrant

‘Many fortepianists play meticulous modern copies of instruments from the 1820s and 30s, but Olga Pashchenko has the real thing.’- the Guardian

A new recording for Alpha of the double concerto by Dussek and Dussek’s chamber music with Alexei Lubimov and the Finnish Baroque Orchestra, as well as a recording of the piano works for four hands by Claude Debussy, with Alexander Melnikov (for Harmonia Mundi) will be released soon. 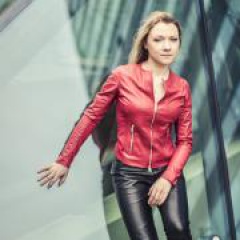