When Tedi Papavrami arrived in France at a young age, he was faced with a country and a culture that were entirely foreign to him. Moved out of natural curiosity paired with a great yearning to master the French language – and also to overcome initial loneliness – he plunged into reading Stendhal, Proust, Flaubert, Dostoevsky, Chekhov, Kafka... all in French.

What makes Tedi a unique and rare musician is his curiosity for what lies beyond borders. Along with his high artistic and intellectual standards, it helps him bridge the immense gap between his original background and new horizons. Therefore, when translator Jusuf Vrioni passed away in 2000, it came as no surprise that Tedi Papavrami took up the task of translating into French the works of Albanian author Ismail Kadare, whom he had known as a child. That incursion into literature also provided him with “a means of leading a professional existence apart from the violin”. In 2013 he continued in that vein by publishing an account of his own youth, Fugue pour Violon Seul, in French. Unanimously hailed by the press, the book recounts his trajectory as a child prodigy in Albania and his passage to the West and to freedom. Moreover, in 2003, when actress Jeanne Moreau met Tedi in a television programme, she quickly recruited him to play Danceny, the violinist, alongside Catherine Deneuve, Rupert Everett and Nastasja Kinski in Josée Dayan's TV mini-series adaptation of Choderlos de Laclos’s Dangerous Liaisons.

Such a wide range of activities and interests would probably not have been possible without a certain musical precocity coupled with long hours of practice from a very early age. The violin was always part of Tedi’s life. He was introduced to it at the age of five by his father, a brilliant teacher whose long experience in musical instruction had led him to develop a method for training small children. Tedi progressed very rapidly, and within three years he was performing Sarasate's Airs Bohémiens with the Tirana Philharmonic Orchestra. At the age of eleven he tackled Paganini's Concerto No. 1 with the fearsome cadenza by Emile Sauret.

The year was 1982. Albania had isolated itself from the rest of the world for decades. French flautist Alain Marion, who had come to give a concert in Tirana, just happened to hear the child prodigy play – and promptly arranged for him to come to Paris with a bursary from the French government. Tedi went on to study with Pierre Amoyal at the Conservatoire National Supérieur de Musique and also appeared on popular TV programmes as well as giving concerts at that time.

Having reached the end of his studies by the age of fifteen, Tedi went on perfecting his instrumental and musical development on his own. The Communist regime in Albania punished those family members who had stayed behind with severe sanctions and reprisals that remained in force until the regime fell in 1991. In the meantime, Tedi and his parents had left Paris in order to avoid Albanian embassy officials who were on their tail. Friends helped them settle near Bordeaux.

Tedi Papavrami went on to win several important international prizes. In the 1990‘s he launched his career as soloist and chamber musician. Since then, he has collaborated as concerto soloist with conductors of the likes of Kurt Sanderling, Antonio Pappano, Armin Jordan, Emmanuel Krivine, Manfred Honeck, François-Xavier Roth, Thierry Fischer, Gilbert Varga and M. Aeschenbacher. He was also a member of the Schumann Quartet (with piano) for nine years. He has performed in recitals with chamber music partners such as Philippe Bianconi, Nelson Goerner, Maria Joao Pires, Martha Argerich, Gary Hofmann, Marc Coppey, Paul Meyer and Lawrence Power. Ever since 2011 he has been presenting the complete Beethoven violin sonatas and piano trios in the company of cellist Xavier Phillips and pianist François Frédéric Guy (with whom Papavrami makes frequent concert appearances).

Tedi Papavrami now lives in Geneva, Switzerland, where he was appointed violin professor at the Haute École de Musique de Genève in 2008. He plays on one of the two violins built for him by violinmaker Christian Bayon. 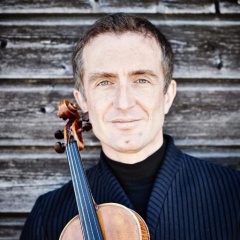