Andris Nelsons is Music Director of the Boston Symphony Orchestra and is Gewandhauskapellmeister of the Gewandhausorchester Leipzig, with the appointment commencing in February 2018. With these positions, and in leading a pioneering alliance between two such esteemed institutions, Grammy Award-winning Nelsons is firmly underlined as one of the most renowned and innovative conductors on
the international scene today.

2014/15 season and after one year his contract was extended through the 2021/22 season. In summer 2015 and spring 2016, the BSO and Nelsons embarked on their first European tours and in November 2017 they tour to Japan together for the first time, notably with three performances in Suntory Hall. Nelsons gave his debut with the Gewandhausorchester in 2011, followed by regular performances at the Gewandhaus in subsequent years. In February 2018 Nelsons receives the title of Gewandhauskapellmeister, in a four week inaugural festival, which also marks the 275th Jubiläumssaison of the orchestra. From April 2018, Nelsons and the Gewandhausorchester embark upon their first European tour together, with performances at prestigious venues including the Elbphilharmonie Hamburg, the Concertgebouw Amsterdam and the Musikverein Vienna.

In the 2017/2018 season Nelsons is Artist in Residence at the Konzerthaus Dortmund and continues his regular collaboration with Wiener Philharmoniker, leading the orchestra on tour to China, with double dates in five cities including Shanghai, Macao and Guangzhou. Throughout his career, Nelsons has also established regular collaborations with Het Koninklijk Concertgebouworkest, Berliner Philharmoniker, Symphonieorchester des Bayerischen Rundfunks and Philharmonia Orchestra. In the pit, Nelsons has been a regular guest at the Bayreuther Festspiele and also at the Royal Opera House Covent Garden where he will conduct Lohengrin in David Alden’s new production this season.

Andris Nelsons has an exclusive recording relationship with Deutsche Grammophon, which has paved the way for three landmark projects. Nelsons and the BSO partner on recording the complete Shostakovich symphonies, and the opera Lady Macbeth of the Mtensk District. The first and second instalments in this exciting collaboration have both received consecutive Grammy Awards for Best Orchestral performance, 2016 and 2017. Nelsons and the yellow label also embark upon a collaboration with the Gewandhausorchester that sheds new light on the symphonies of Bruckner, redefining Bruckner’s very distinctive sound world, the most recent release of Bruckner’s Symphony No.3, receiving widespread critical acclaim. Furthermore, Nelsons will record Beethoven’s complete symphonies with the Wiener Philharmoniker between
2016-2019, and Nelsons returns to perform the complete cycle in 2020, celebrating the 250th anniversary of the composer’s birth.

Born in Riga in 1978 into a family of musicians, Andris Nelsons began his career as a trumpeter in the Latvian National Opera Orchestra before studying conducting. He was Music Director of the City of Birmingham Symphony Orchestra from 2008-2015, Principal Conductor of Nordwestdeutsche Philharmonie in Herford, Germany 2006-2009 and Music Director of Latvian National Opera 2003-2007. 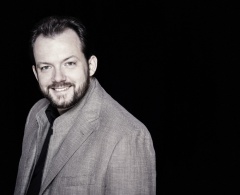