“It must be said from the beginning that one of the joys of seeing Mobley is hearing his beautiful alto coming out of a big, tall man who looks more like a linebacker for the Miami Dolphins than the P.G. Wodehouse party guest his name might suggest.”

Countertenor Reginald L. Mobley fully intended to speak his art through watercolors and oil pastels until circumstance demanded that his own voice should speak for itself. Since reducing his visual color palette to the black and white of a score, he’s endeavored to open up a wider spectrum onstage.

Never bound by conventional countertenor repertoire, Reggie has a fair bit of non-classical work in tow. His first professional work was in Musical Theatre, and while working in Japan (as a Singer/Actor for Tokyo Disney), he performed cabaret shows of gospel, jazz, and torch songs in jazz clubs around Tokyo. Since moving in Boston, a strong devotion to social and political activism has awoken and become a part of everyday life. As a member of NoBoston2024 and allied with No Boston Olympics, Reggie (one of the #tenpeopleontwitter) was able to lend his strength to the effort to reject the 2024 Olympic Games bid that was “awarded” to Boston. That, and time volunteering in local political campaigns, has only helped focus a desire to make a difference within the Arts. Particularly with the massive inequality regarding race, gender, and sexuality within the classical music industry.

And though not one to regret, Reggie has considered rediscovering his artistic roots. So if seen post concert, forego an autograph and ask for one of his self-acclaimed stick figure drawings. It’s a start. 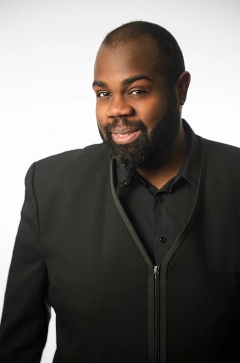