Born in Moscow into a family of musicians, Maria Milstein studied in Amsterdam with Ilya Grubert, in London with David Takeno and at the Queen Elisabeth Music Chapel in Waterloo (Belgium) with Augustin Dumay.

Maria is a prizewinner of major international competitions both as a soloist and as a chamber musician, such as "Città di Brescia" and "Premio Rodolfo Lipizer" in Italy, the ARD Competition in Munich, the Lyon Chamber Music Competition and the Kersjes Prize in the Netherlands. In 2016, Maria is awarded the Fellowship of the Borletti Buitoni Trust, and in 2018, she receives the Dutch Music Prize - the highest recognition for a classical musician in the Netherlands awarded by the Ministry of Culture.

Maria performs extensively across Europe in halls such as the Concertgebouw in Amsterdam, BOZAR in Brussels, Musikverein in Vienna, the Philharmonie of Cologne and Cité de la Musique in Paris. She has appeared as a soloist with a.o. The Netherlands Radio Philharmonic Orchestra, the National Orchestra of Belgium, the Hague Philharmonic, the Brussels Philharmonic and Amsterdam Sinfonietta, and worked with conductors such as Vasily Petrenko, Giancarlo Guerrero, Michel Tabachnik, Jean-Jacques Kantorow, Christian Arming and Reinbert de Leeuw.

A keen chamber musician, Maria formed the succesful Van Baerle Trio together with pianist Hannes Minnaar and cellist Gideon den Herder, one of the leading trios of its generation. After winning the ARD Competition and the Lyon Chamber Music Competition, the Trio made the ECHO Rising Stars Tour in 2014, peforming in famous concert halls all over Europe. The Trio already released two CD's, both praised in the international press, and is presently recording the complete works for piano trio by Beethoven for Challenge Records.

Maria's own debut CD « Sounds of War », recorded with pianist Hanna Shybayeva for Cobra Records and featuring Sonatas by Poulenc, Janáček and Prokofiev, received lavish reviews in the international press and won the Edison Klassiek Prize 2015 in the category “best chamber music album”. In October 2017 her second album “La Sonate de Vinteuil”, recorded with pianist Nathalia Milstein is released on the French label Mirare, and is voted "best CD of 2017" by the Dutch press.
​
Maria plays on a violin by Michel Angelo Bergonzi (Cremona, ca. 1750), on loan from the Dutch Music Instruments Foundation, and holds a teaching position at the Conservatory of Amsterdam. 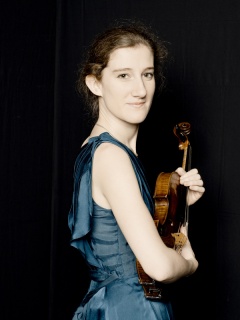