For more than fifteen years the pianist Ciro Longobardi has dedicated himself to studying and disseminating modern and contemporary music with its specific languages. Filled with an insatiable curiosity for making music in all its forms, he pursues a career as soloist and chamber music performer, as well as in multimedial projects, music theatre and improvisation.

He studied the piano with Carlo Alessandro Lapegna, going on to win a European Community scholarship to attend the APM School in Saluzzo, where he studied piano with Alexander Lonquich and chamber music with Franco Gulli, Maurice Bourgue and Franco Rossi. At the same time he completed his studies at Liceo classico and attended the Facoltà di Lettere e Filosofia at the Università Federico II di Napoli, pursuing his studies of musical analysis by himself. From 1994 to 1996 he attended masterclasses held by Bernhard Wambach at Darmstadt and Parma.

His activity with Ensemble Dissonanzen has been of particular interest, ranging over a wide variety of productions, from repertoire to improvisation and multimedial projects. Thus Ciro Longobardi has had the chance to work with some prominent figures on the contemporary music scene, such as the Duo Markus Stockhausen & Tara Bouman, Michel Godard, Cristina Zavalloni, Jim Pugliese, Stefano Scodanibbio, Marc Ribot, Alvin Curran, Adam Rudolph, as well as many of the most gifted musicians in and around Naples and in Italy as a whole. This has also enabled him to work with the Ensemble on the juxtaposition of music and images, resulting in a series of live performances accompanying silent films (including such fundamental works as Man Ray’s short movies and Das Kabinet des Doktor Caligari by Robert Wiene), and a new soundtrack for the film Assunta Spina (1915) presented at the Anthology Film Archives, New York, and at the Italian Film Festival, Annecy, both in 2006. His acitivity with Dissonanzen also featured programmes paying tribute to such composers as Messiaen, Cage, Dallapiccola, Petrassi, Castiglioni and Henze (see discography with Dissonanzen)

Since September 2005 Longobardi has embarked on a fruitful collaboration with Ensemble Algoritmo Rome, conducted by Marco Angius, in concerts given in Amsterdam, Modena, Krakow, Parma, Rome, Venice, Tallinn, Macerata. This ensemble specialises in performances of works, whether past or recent, of exceptional complexity and virtuosity. Its repertoire includes compositions by Berio, Boulez, Clementi, Fedele, Lombardi, Mosca, de Pablo, Razzi, Sani, Sciarrino, Stockhausen.

His enthusiasm for making music in all shapes and forms has led to a number of experiences as pianist/keyboard player in an orchestra. Thus he appeared with the orchestra of the Teatro di San Carlo, Napoli, in works by Strauss, Respighi, Henze, and in the performance of Goffredo Petrassi’s Coro di Morti, for male voice choir, three pianos, brass, doublebasses and percussion, under Pascal Rophé to mark the centenary of Petrassi’s birth. He recently played with the Orchestra Sinfonica Nazionale della RAI, Turin, (for Rai Nuova Musica 2006) in orchestral works by Battistelli, Di Bari, Fedele, Francesconi, Lachenmann, Pousseur, with soloists from the same orchestra (conducted by Marco Angius) in complex chamber music works including Kreuzspiel and Kontrapunkte by Karlheinz Stockhausen (RAI Nuova Musica 2006) and with the Orchestra dellla Svizzera Italiana in City Life by Steve Reich.

His recent collaboration with Salvatore Sciarrino deserves particular attention: under the sound direction of the sizilian Maestro Longobardi released for Stradivarius the CD Sciarrino/Ravel-Nuit, including Quattro Notturni, Due Notturni Crudeli, De la Nuit, besides Ravel's Gaspard de la Nuit (read reviews). The collaboration with Ivan Fedele is another important one: Longobardi recorded his complete piano works for Limenmusic. The DVD/CD got a Coup de Coeur de Radio France and the Special Prize of the Critics for the best Italian classical/instrumental production in 2011.

In January 2001, in the Foyer of the Teatro di San Carlo, Napoli, he performed the Formant 2 from Pierre Boulez’s 3rd Sonata for piano in front of the composer.

As already written, he has made recordings for Stradivarius, Limenmusic, and for Mode, RAI Trade, Tactus, Neos, VDM. He has also had performances recorded and broadcast by RAI-Radiotre, Dutch Radio, Hessischer Rundfunk, Saarlandischer Rundfunk, Croatian Radio, Austrian Radio.

Between 1991 and 1994 he was successful in three public competitions for tenure posts teaching piano in Italian conservatories. He currently teaches at the Conservatorio G. Martucci, Salerno.

A passionate spreader of the contemporary piano repertoire, he has held lecture/recitals and masterclasses for the Conservatories of Ghent, Rotterdam, Bruxelles (Koninklijk Konservatorium), the University of Chicago, the Manhattan School of Music New York, and in several Italian conservatories. 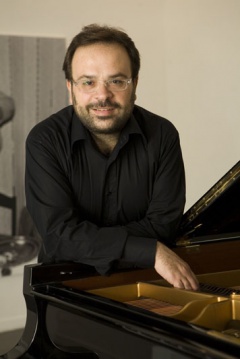