In May 2019 Lintu was appointed Chief Conductor of the Finnish National Opera and Ballet, a role which he takes up in January 2022 shortly after his eighth and final season as the FRSO’s Chief Conductor. The appointment follows a series of hugely successful productions including Tristan und Isolde in 2016, Sibelius’s Kullervo in 2017 and Berg’s Wozzeck in Spring 2019; he also conducts Strauss’s Ariadne auf Naxos in January-February 2020. Lintu also regularly conducts at the

Savonlinna Festival, most recently for productions of Verdi’s Otello (2018) and Sallinen’s Kullervo (2017).

Hannu Lintu has made several recordings for Ondine, BIS, Naxos, Avie and Hyperion.
He studied cello and piano at the Sibelius Academy, where he later studied conducting with Jorma Panula. He participated in masterclasses with Myung-Whun Chung at the L’Accademia Musicale Chigiana in Siena, Italy, and took first prize at the Nordic Conducting Competition in Bergen in 1994. 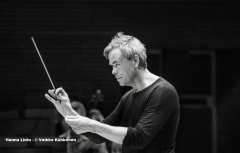