International media have described the 23-year old-Russian soprano Julia Lezhneva as among ‘few young singers being widely celebrated so early in their careers’ (Independent) and as possessing the voice of ‘angelic beauty’ (New York Times), ‘pure tone’ (Die Welt) and ‘flawless technique’ (The Guardian).

Alex Ross in the New Yorker commented: “she sent me scurrying to the Internet to find out more… Lezhneva has extraordinary potential as a Baroque and bel canto singer” while Norman Lebrecht outlined Lezhneva as ‘heading for the stratosphere’.

Having earned an honors degree in vocal studies and a piano diploma from the Moscow State Tchaikovsky Conservatory Academic Music College as well as completing the postgraduate course at the Cardiff International Academy of Voice under the guidance of Dennis O’Neill supported by the Fellowship of the Kempinski Arts Support Programme, Julia Lezhneva has completed her academic education at London’s Guildhall School of Music and Drama under Yvonne Kenny gaining MMus degree with distinction.
Ms. Lezhneva came to international attention at the age of 17 as the Grand Prix winner of the 6th Elena Obraztsova International Competition for Opera Singers.

At the age of eighteen, Ms Lezhneva has shared the concert stage with Juan Diego Flórez at the opening of the 2008 Rossini Opera Festival under Alberto Zedda as well as made her first professional recording (Naïve) performing soprano 2 part in J.S.Bach’s B-minor Mass with Marc Minkowski and Les Musiciens du Louvre.
In January 2010 Ms Lezhneva made her debut at the Salzburg Mozartwoche Festival performing the soprano second part in Mozart’s Great Mass with Marc Minkowski and MDLG. In April 2010 she participated in the memorial concert for late Polish president Lech Kaczynski, singing the soprano part in Mozart’s Requiem under Marc Minkowski at the Main Square of Krakow.
Ms Lezhneva caused a sensation in London at the 2010 Classical Brit Awards, singing Rossini’s Fra il padre at the Royal Albert Hall upon the invitation of Dame Kiri Te Kanawa sharing the gala stage with Angela Gheorghiu, Rolando Villazon and Bryn Terfel. 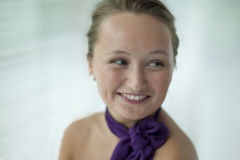