The young Swiss soloist Rachel Kolly d'Alba began playing the violin when she was five years old. She is considered one of the most talented Swiss musicians of her generation with a quality of vibrato that has been compared to great violinists of the past and her matching fire, temperament and musicianship adding colour and life to her playing. That these qualities are being recognised in and beyond Europe is shown by her first concerto recording being voted Best Recording of the Year in 2012 by ICMA and her second concerto recording having already been nominated for the same concerto category for 2013 after its release in October 2012. Rachel Kolly d'Alba has won every major Swiss award including the Swiss Paderewski Prize in 1997, 1st Prize in the Execution Musicale "Young Talents" of 1998, the Kiefer Hablitzel Foundation in 2000, Foundation Award Fridl-Wald in 2002 and Leenards Foundation in 2004. She won the 2005 Fifth International Competition "Julio Cardona" where she also received the prize for Best Interpretation of a Contemporary Work. Today she can add the outstanding Supersonic Award 2011 (Pizzicato Magazine) and ICMA Award 2012 for her CD recordings to this highly regarded list.

Rachel Kolly d’Alba made her debut as a concerto soloist when she was 12. She played with the Rotterdam Philharmonic Orchestra, BBC Philharmonic Orchestra, Seville Symphony Orchestra, Orchestra Sinfonica della RAI of Torino and the WDR Rundfunkorchester Köln alongside being invited to orchestras as prestigious as Tokyo’s NHK Symphony Orchestra, Lausanne Chamber Orchestra, Orchestre National des Pays de la Loire, Orchestra della Toscana (“In Bernstein’s Serenade the young violinist Rachel Kolly D’Alba drew every possible lyrical quality from a cerebral and a slightly complex score with a sound rich in colors and expressive intensity. It was an excellent performance greeted by huge applause...” Giuseppe Rossi – Quotidiano Nazionale, November 2012), Toulouse Chamber Orchestra, Orchestre Symphonique de Bienne, Orchestra Sinfonica di Milano “G.Verdi”, Berner Symphonieorchester, Orchestra della Radio Svizzera Italiana of Lugano, Fribourg Chamber Orchestra.
In season 2013/2014 Rachel plays with orchestras including the Rotterdam Phil, Bournemouth Symphony Orchestra, WDR Rundfunkorchester Köln, a tour with the Orchestra Bolzano, Symphonic radio Orchestra Frankfurt. As a recitalist she plays with her duo partner Christian Chamorel at highly regarded festivals like the Menuhin Festival in Gstaad, Schleswig Holstein Festival, Festival de Menton, Festival "Encuentros" and "Mozarteum" at the Teatro Colon in Buenos Aires, the "Sigall" in Chile, the "International Festival of Flanders" , or at Teatro Olimpico through her charity association, CultureALL. Her US debut in the Chicago International Beethoven Festival during September 2012 brought this enthusiastic review by Alan G. Artner in the Chicago Tribune: “Swiss violinist Rachel Kolly d'Alba made a sensational Chicago debut (…) Kolly d'Alba gave an impassioned reading, seductive in tone and visionary in spirit. She made of it Art Nouveau architecture for the ear, a thrilling achievement.”

Rachel Kolly d’Alba signed worldwide with the major recording label Warner Classics in 2010. Her first release of six sonatas by composer Eugène Ysaÿe, "Passion Ysaÿe", burst onto the musical scene receiving unanimously high praise from international press. Her next CD, "French Impressions", was released in October 2011, this time as soloist with orchestras conducted by Jean-Jacques Kantorow and John Axelrod in French music by Saint-Saëns, Chausson, Ravel and Ysaÿe. “ This new recording,”French Impressions”, contains many beauties, some hidden and others more obvious. We are presented with a marvellous recording confirming the class of its main protagonist. (…) These pieces suit the young Swiss violinist's style as she travels through them with impeccable taste and plenty of technique to make them hers, with a spontaneity that comes from ease and grace.” (March 2012 / Claire Vaquero Williams - “Scherzo”). This CD was voted Best Recording of the Year in the “Concerto” category by the prestigious International Classical Music Award (ICMA) 2012. Next recording “American Serenade” features works by American composers Gershwin, Bernstein and Waxman with continuing support from M. John Axelrod and L’Orchestre National des Pays de la Loire. Released worldwide in October 2012, has been rated “Supersonic” by “Pizzicato” , 5 ***** in french Diapason Mag, and immediately nominated for the same ICMA award.

Rachel Kolly d’Alba received her violin teaching diploma from Lausanne Conservatoire when she was 15. She then continued her studies in the class of Igor Ozim in Bern and graduated from there as a soloist whilst also benefiting from lessons and master classes with other masters who have included Franco Gulli, Ivry Gitlis, Boris Kushnir, Hansheinz Schneeberger and Thomas Kakuska (of the Alban Berg Quartet). Her interests extend into the worlds of contemporary music, analysis and composition and she continually studies in those areas creating her own new work alongside collaborations with composers such as Tristan Murail, Eric Gaudibert and Jürg Wyttenbach.

Rachel Kolly d’Alba became an Ambassador for Handicap International and her first work for the charity was in Cambodia in February 2013. Since then, she organized concerts for the organisation. She is a devoted mother to her daughter and she also writes short stories and novels. Rachel has been privileged to play on a magnificent Stradivarius violin made in 1732 since April 2011. 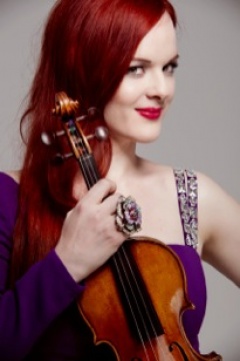