Felix Klieser is an exceptional artist in several aspects. At the age of 4 he expressed the wish to play the horn. At the age of 17, Felix Klieser enrolled in Prof. Markus Maskuniitty’s class at the Hochschule für Musik und Theater Hannover. In 2013 Felix Klieser presented his debut album “Reveries” which was released by Berlin Classics. The recording demonstrates Felix Klieser’s incredible musicality as well as his brilliant technique and command of his instrument. The CD was met with rave reviews, among others from Frankfurter Allgemeine Zeitung. Felix Klieser also appears together with Christiane Karg and Malcolm Martineau on the album “Heimliche Aufforderung” presented by Berlin Classics in 2014. In 2014 Felix Klieser received the ECHO Klassik for young artist of the year. Also his book about his fascinating live was published. In 2016 Felix Klieser will receive the prestigious Leonard Bernstein Award of the Schleswig-Holstein Musik Festival. Felix Klieser’s special desire is to evoke a variety of colours and beautiful tones through the sound of this instrument. Quite recently he received an excellent review from Süddeutsche Zeitung which described his performance as “simply perfect” with precision, a range of expression and beauty of sound.

In April 2015 his new CD with the Württembergischen Kammerorchester Heilbronn and Rubin Gazarian was released by Berlin Classics, features Felix Klieser playing Horn concerts from Michael and Joseph Haydn and W.A. Mozart. With this CD he demonstrates the rare ability to play “deep” and “high” Horn pieces. From 2008 until 2011 Felix Klieser was a member of the National Youth Orchestra of Germany (Bundesjugendorchester) where he frequently performed at major venues such as Berlin Philharmonie, Beethovenhalle Bonn, Köln Philharmonie and Philharmonie am Gasteig München. He also participated in numerous productions by Westdeutscher Rundfunk and has undertaken tours to Austria, Italy, Switzerland and South Africa among others. He is ambassador of the One-Hand Musical Instrument Trust OHMI. 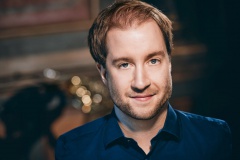