Winner of the 62nd ARD International Music Competition, Bomsori Kim is internationally regarded as one of today’s most vibrant and exciting violinist.

Bomsori will also perform for the first time with Tonkunstler Orchestra Vienna and she will make her debut at Suntory Hall Tokyo with Yomiuri Nippon Orchestra.

Bomsori will be also on tour in Europe, Asia and USA with Polish pianist Rafal Blechacz. North American highlights of the season include her debut performance with the Lincoln Symphony Orchestra and recital appearances at the Maestro Foundation and La Jolla Music Society’s Rising Star Series.

As a soloist, Bomsori has appeared at numerous venues worldwide, such as Musikverein Golden Hall in Vienna, Tchaikovsky Hall in Moscow, Philharmonic Hall in St. Petersburg, Finlandia Hall in Helsinki, the Herkulessaal and the Prinzregententheater in Munich, Berlin Philharmonic Chamber Hall, Rudolfinum and Smetana Hall in Prague, and Seoul Arts Center Concert Hall.

A native of South Korea, Bomsori received a Bachelor’s degree at Seoul National University, where she studied with Young Uck Kim. She also earned her Master of Music Degree and Artist Diploma at The Juilliard School as a full-scholarship candidate and studied with Sylvia Rosenberg and Ronald Copes.

With the support of Kumho Asiana Cultural Foundation, she currently plays on a 1774 violin by Joannes Baptista Guadagnini. 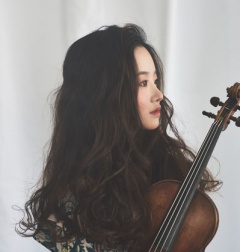