“The last six years have been dizzying times for Miloš Karadaglić, the young classical guitarist from Montenegro launched by Deutsche Grammophon in 2011 with his first commercial solo album” wrote the Sunday Times in February 2014. “It topped the UK classical charts and won awards, making Karadaglic, at 30, probably the biggest classical-guitar phenomenon since John Williams in the 1960s and Julian Bream a decade below.” The London press following his celebrated Royal Albert Hall recital debut continued with praise, The Guardian commenting “More extraordinary by far, however, was the way a single guitarist, playing an intimate and understated set, and equipped with a single microphone and some clever lighting, could shrink the Hall's cavernous space into something so close.” The Independent concluded: “Defying its many critics to offer a dramatic and rounded evening of classical music, the guitar itself was the breakout star here – a sleight of hand that makes Karadaglić not only a magician, but a serious and accomplished musician”.

Whether performing for an audience of thousands in the Royal Albert Hall or an intimate chamber music performance for 100 people, MILOŠ equally enjoys appearing in major concert halls as in non-traditional venues such as New York’s Le Poisson Rouge, London’s Camden Roundhouse (iTunes Festival) and Deutsche Grammophon’s Yellow Lounge club nights. His third album for Mercury Classics/Deutsche Grammophon, released in February 2014, takes Rodrigo’s iconic Concierto de Aranjuez as the starting point for a journey across the Spanish landscape. Recorded with the London Philharmonic Orchestra and Yannick Nézet-Séguin, the album has sealed MILOŠ’ star status overseas with comments such as France’s Figaro Magazine: “Milos, the new king of Aranjuez” and the New York Times: “one of the most exciting and communicative classical guitarists today.”

MILOŠ’ recent touring has seen him make important debuts with the world's finest ensembles including the Chicago Symphony, Los Angeles Philharmonic, Cleveland, Philadelphia, and Spanish National Orchestras and the Accademia Nazionale di Santa Cecilia, Rome. In 2015/2016, MILOŠ performs with the National Symphony Orchestra Washington, Japan Century, Kaohsiung Symphony, Czech Philharmonic, Oslo Philharmonic, Munich Philharmonic, Norrköping Symphony, and London Philharmonic Orchestras, and with the Royal Northern Sinfonia on tour in the UK. He also undertakes recitals tours of Japan and the US, in addition to recital appearances in Spain, the Netherlands, and the UK, including at the Wigmore Hall. MILOŠ will also play at the Munich 360°, Rheingau, Girona, Verbier, and Schleswig Holstein Festivals, and with the Camerata Bern at Sommets musicaux de Gstaad.

2014 saw the launch of a new exclusive special edition watch that MILOŠ designed for the luxury Swiss watchmaker, Raymond Weil, with proceeds from sales going to the Mladost Orphanage in Bijela, Montenegro. In 2015, a second edition of the watch will be released, limited to 50 pieces. In December 2015, MILOŠ will also take part in a charity performance at the Berliner Philharmonie, in aid of social charity, Gute Tat. In addition to his charitable work, MILOŠ is a passionate supporter of music education and acts as a Patron of the Mayor of London Fund for Young Musicians and Awards for Young Musicians, and is an Ambassador for Live Music Now. He recorded music for the soundtrack of the animated movie, When Marnie Was There, for the world-famous Japanese filmmaker Studio Ghibli, co-presented the television broadcasts for the 2014 BBC Young Musician competition, and appeared on Sky Arts’ reality TV show, Guitar Star, as a celebrity mentor.

Born in Montenegro in 1983, MILOŠ first started playing the guitar at the age of 8. When he was 16 he successfully applied for a scholarship to study at the Royal Academy of Music and moved to London where he continues to live while keeping close ties with his family and homeland. He was appointed a Fellow of the Royal Academy of Music in 2015. MILOŠ plays a 2007 Greg Smallman guitar, kindly lent to him by Paul and Jenny Gillham. 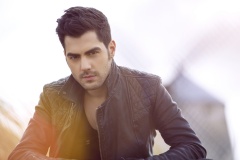