Guy Johnston is one of the most exciting and versatile British cellists of his generation. Born into a musical family, Guy joined his brothers in the worldrenowned choir of King's College, Cambridge, where he recorded the famous carol

Once in Royal David's City, under Stephen Cleobury. He went on to achieve important early successes through the BBC Young Musician of the Year title, the Guilhermina Suggia Gift, the Shell London Symphony Orchestra Gerald MacDonald Award and receiving a Classical Brit Award at the Royal Albert Hall. His mentors have included Steven Doane, Ralph Kirshbaum, Bernard Greenhouse, Anner Bylsma as well as Steven Isserlis and David Waterman at IMS Prussia Cove.

Guy has performed at chamber music festivals and with orchestras around the world and more recently with the NHK Symphony Orchestra in Japan, a premiere performance of the Howells concerto at the Cheltenham Festival, and a new cello concerto by Charlotte Bray commissioned for the BBC Proms. He is Artistic Director of the Hatfield House Chamber Music Festival and enjoys teaching a class of young cellists at the Royal Academy of Music as well as being a patron of the Pierre Fournier Award.

Guy plays a 1714 David Tecchler cello, generously on loan from the GodleeTecchler Trust which is administered by The Royal Society of Musicians. He has recently commissioned a number of short new works to celebrate its tricentenary by composers including Charlotte Bray, David Matthews and Mark Simpson. 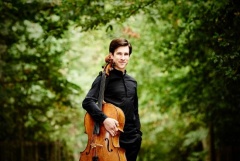