Performing music from baroque to new commissions on both modern and period instruments, Alina Ibragimova has established a reputation as one of the most accomplished and intriguing violinists of her generation. This was illustrated in her prominent presence at the 2015 BBC Proms, which included a symphonic concerto, a performance with a baroque ensemble and two late-night Royal Albert Hall recitals featuring the complete Bach partitas and sonatas, for which The Guardian commented “The immediacy and honesty of Ibragimova’s playing has the curious ability to collapse any sense of distance between performer and listener”.

Born in Russia in 1985 Alina studied at the Moscow Gnesin School before moving with her family to the UK in 1995 where she studied at the Yehudi Menuhin School and Royal College of Music. She was also a member of the Kronberg Academy Masters programme. Alina's teachers have included Natasha Boyarsky, Gordan Nikolitch and Christian Tetzlaff. Alina has been the recipient of awards including the Royal Philharmonic Society Young Artist Award 2010, the Borletti-Buitoni Trust Award 2008, the Classical BRIT Young Performer of the Year Award 2009 and was a member of the BBC New Generation Artists Scheme 2005-7. She was made an MBE in the 2016 New Year Honours List. Alina records for Hyperion Records and performs on a c.1775 Anselmo Bellosio violin kindly provided by Georg von Opel. 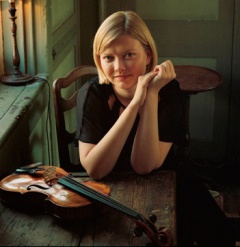