The mission of the Hong Kong Philharmonic Orchestra is to inspire and expand musical appreciation in Hong Kong and beyond, and to be a financially secure institution that brings distinction to the music world through its enriching performances and premier international standing.

Jaap van Zweden, one of today’s most sought-after conductors, has been the Orchestra’s Music Director since the 2012/13 concert season, a position he will continue to hold until at least 2022. In addition, Maestro van Zweden will also be the next Music Director of the New York Philharmonic starting with the 2018/19 season.

Yu Long was appointed for an initial three-year term in the 2015/16 season as Principal Guest Conductor.

Under Maestro van Zweden, the HK Phil is undertaking a variety of initiatives including a four-year project to perform and record the complete Ring of the Nibelung (Richard Wagner). The Orchestra is in the third of this four-year journey, performing one opera annually in concert. The performances being recorded live for the Naxos label are winning widespread international rare reviews; and mark the first performances by a Hong Kong or mainland Chinese orchestra of the entire Ring cycle.

Also under van Zweden, the orchestra has undertaken tours to Taiwan, Europe and Mainland China. The orchestra will undertake an ambitious five-city tour to Seoul, Osaka, Singapore, Melbourne and Sydney in April - May 2017 in celebration of the 20th anniversary of the establishment of the HKSAR.

The HK Phil promotes the work of Hong Kong and Chinese composers through an active commissioning programme, and has released recordings featuring Tan Dun and Bright Sheng, each conducting their own compositions, on the Naxos label. Its acclaimed community engagement programme brings music to tens of thousands of children annually. A recording was issued free to schoolchildren throughout Hong Kong of Britten’s The Young Person’s Guide to the Orchestra, Prokofiev’s Peter and the Wolf and Leopold Mozart’s Toy Symphony.

The Swire Group has been the Principal Patron of the HK Phil since 2006. Through this sponsorship, which is the largest in the orchestra’s history, Swire also endeavours to promote artistic excellence, foster access to classical music and stimulate cultural participation in Hong Kong, and to enhance Hong Kong’s reputation as one of the great cities of the world.

Thanks to a significant subsidy from the Hong Kong Government and long-term funding from Principal Patron Swire, the Hong Kong Jockey Club and other supporters, the HK Phil now boasts a full-time annual schedule of classical music concerts, pops concerts, an extensive education programme, and collaborations for staged opera with Opera Hong Kong and the Hong Kong Arts Festival.

The Orchestra celebrated its 40th season as a professional orchestra in 2013/14. 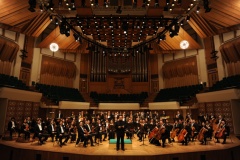