Described by The Telegraph as a conductor of “glowing reputation,” Pablo Heras-Casado enjoys an unusually varied and broad-ranging career, encompassing the great symphonic and operatic repertoire, historically informed performances, and contemporary scores.

Principal Guest Conductor at Teatro Real in Madrid and Director of the Granada Festival, he also enjoys a long-term collaboration with Freiburger Barockorchester featuring extensive touring and recording projects.

In the 2018/19 season, Heras-Casado is Spotlight Artist of the NTR Matinee series at Het Concertgebouw in Amsterdam, conducting the Radio Filharmonisch Orkest, Freiburger Barockorchester and Mahler Chamber Orchestra on tour. Special projects include the opening of the Berlioz year with the composer’s Grand Messe des Morts with Orchestre de Paris at the Philharmonie and a complete Schumann Symphony Cycle with Münchner Philharmoniker.

An extensive discography includes a developing series of recordings for harmonia mundi, recognised at the Gramophone Awards as 2018’s Label of the Year, entitled “Die Neue Romantik”. Selections of this series feature the music of Mendelssohn, Schumann and other Romantic composers, recorded together with Freiburger Barockorchester and partners such as Isabelle Faust, Jean-Guihen Queyras and Alexander Melnikov. The latest release, from April 2019, focusses once more on the music of Felix Mendelssohn-Bartholdy, where Heras-Casado is joined by Kristian Bezuidenhout on the fortepiano.

Other releases on the label include dedicated albums to the music of Debussy, with Philharmonia Orchestra; Bartók with Münchner Philharmoniker and Javier Perianes; a DVD release of Wagner’s Der Fliegende Holländer at Teatro Real; and Monteverdi’s Selva morale e spirituale with Balthasar-Neumann-Chor & Ensemble. Having also recorded on Deutsche Grammophon, Decca and Sony Classical, he has received numerous awards, including Preis der Deutschen Schallplattenkritik, two Diapason d’Or, and Latin Grammy.

As an opera conductor, he has been highly successful at The Metropolitan Opera in New York, Festival d’Aix-en-Provence, Festspiel Baden-Baden, and Staatsoper and Deutsche Oper Berlin.

Musical America’s 2014 Conductor of the Year, Pablo Heras-Casado holds the Medalla de Honor of the Rodriguez Acosta Foundation, Medalla de Andalucia 2019 and Ambassador Award of this region. He is Honorary Ambassador and recipient of the Golden Medal of Merit by the Council of Granada, as well as Honorary Citizen of the Province of Granada, his hometown. In December 2018 he is awarded the title Chevalier de l’ordre des Arts et des Lettres of the French Republic, awarded by the ambassador of France in Spain, Yves Saint-Geours. 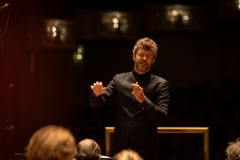