Unforgettable operatic appearances include the title role in Pelléas et Mélisande in Katie Mitchell’s staging at the 2016 Festival d’Aix-en-Province conducted by Esa-Pekka Salonen, a “chameleonic and compelling” (Gramophone) Lulu in Krzysztof Warlikowski’s staging at La Monnaie, and a fearless interpretation of Marie as a flame in the darkness in Zimmermann’s Die Soldaten at the Bayerische Staatsoper – a hugely acclaimed presentation directed by Andreas Kriegenberg and conducted by Kirill Petrenko, for which she won the Faust Award in Germany. She made her Opera de Paris debut last season with La Voix Humaine again in a Warlikowski production. She created the role of Agnès in George Benjamin’s Written on Skin, a production which has garnered rave reviews worldwide, with most recent performances at New York’s Lincoln Center, and she returns to London’s Royal Opera House this season to reprise the role.
Barbara has worked extensively with choreographer Sasha Waltz on productions of Hosokawa’s
Matsukaze and Dusapin’s Passion, thoroughly utilising her physical as well as vocal agility. In the 2016/17 season she will sing the world premieres of Gerald Barry’s Alice’s Adventures Under Ground and Ophelia in Brett Dean’s Hamlet, as well as Berg’s Lulu in a new production directed by Christoph Marthaler at Hamburg Staatsoper, Hosokawa’s Matsukaze at La Monnaie, and a new production of Pelléas et Mélisande for Germany’s Ruhrtriennale, directed by Warlikowski.

Upon describing Barbara’s conducting and programming, the New York Times wrote: “Ms Hannigan’s performances are viscerally affecting … she constructs them with a kind of postmodern self-consciousness; they’re private worlds, designed to satisfy herself – artistically, intellectually, emotionally – as much as her audience.”
The 2016/17 season sees Barbara conducting Tonhalle-Orchester Zürich, Danish National and Swedish Radio symphony orchestras, Munich Philharmonic and the orchestra of the Munich Staatsoper. Since 2012 she has worked closely as conductor with the Dutch orchestral collective, Ludwig. Their 2014 performance at Amsterdam’s Concertgebouw won the Ovatie Award for best classical concert of the year in the Netherlands. They most recently performed together at Italy’s MiTo Festival in September 2016. In 2017, Barbara will release her first album as singer and conductor, with Ludwig as the orchestral forces, on Alpha Classics, entitled Crazy Girl Crazy. The CD features works by Berio, Berg and a specially commissioned Gershwin arrangement by Bill Elliott. A new film on their rehearsal process (directed by Mathieu Amalric) will accompany the CD release, commissioned by Arte and Camera Lucida. 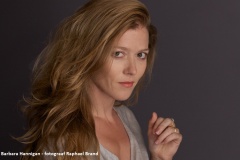