Renowned as a musical pioneer, cellist Matt Haimovitz has inspired classical music lovers and countless new listeners by bringing his artistry to concert halls and clubs, outdoor festivals and intimate coffee houses, any place where passionate music can be heard. He brings a fresh ear to familiar repertoire, champions new music and initiates groundbreaking collaborations as well as creating innovative recording projects for Oxingale Records. Besides his relentless touring schedule, he mentors an award-winning studio of young cellists at McGill University’s Schulich School of Music in Montreal. Through his visionary approach, Haimovitz is re-defining what it means to be an artist for the 21st century.

Haimovitz made his debut in 1984, at the age of 13, as soloist with Zubin Mehta and the Israel Philharmonic. At 17 he made his first recording with James Levine and the Chicago Symphony Orchestra, for Deutsche Grammophon. He has gone on to perform on the world’s most esteemed stages, with such orchestras and conductors as the Berlin Philharmonic with James Levine, the New York Philharmonic with Zubin Mehta, the English Chamber Orchestra with Daniel Barenboim, the Boston Symphony Orchestra with Leonard Slatkin and the Montreal Symphony Orchestra with Kent Nagano. Haimovitz made his Carnegie Hall debut when he substituted for his teacher, the legendary Leonard Rose, in Schubert’s String Quintet in C, alongside Isaac Stern, Shlomo Mintz, Pinchas Zukerman and Mstislav Rostropovich.

The solo cello recital is a Haimovitz trademark, both inside and outside the concert hall. In 2000, he made waves with his Bach “Listening-Room” Tour, for which, to great acclaim, Haimovitz took Bach’s beloved cello suites out into the clubs across the U.S., Canada, and the U.K. Haimovitz’s 50-state Anthem tour in 2003 celebrated living American composers and featured the cellist’s own arrangement of Jimi Hendrix’s “Star-Spangled Banner.” He was the first classical artist to play at New York’s infamous CBGB club, in a performance filmed by ABC News for Nightline UpClose.

In 2015, Haimovitz premieres six new works as part of a major residency at NYC’s Miller Theater. The new Overtures to Bach serve as preludes to each of the 6 Suites for Solo Cello by J.S. Bach. Composers commissioned for Overtures to Bach include Philip Glass, Du Yun, Vijay Iyer, Roberto Sierra, Mohammed Fairouz, and Luna Pearl Woolf.

Haimovitz’s recording career encompasses more than 20 years of award-winning work on Deutche Grammophon and his and composer/producer Luna Pearl Woolf’s own trailblazing independent label Oxingale Records, now in collaboration with PentaTone Classics. Two recent Oxingale albums have been nominated for Juno Awards and a third, Meeting of the Spirits, was nominated for a GRAMMY® for Best Classical Crossover Album and won a GRAMMY® for Best Producer of the Year (Classical). BEETHOVEN, Period, a traversal of the Beethoven Sonatas and Variations for Piano and Cello on period instruments with Christopher O’Riley was an Editor’s Choice pick, and one of the top-10 Beethoven albums of recent times, at Gramophone Magazine. 2015 sees the release of two important solo albums: ORBIT, an expansive 3-SACD compilation of Haimovitz’ solo cello work of the last fifteen years and J.S. Bach The Cello Suites According to Anna Magdalena Bach, a recording of the beloved Cello Suites on baroque cello and cello piccolo. Other recent releases include Haimovitz’s recording of cello concertos by Laura Schwendinger and Pulitzer Prize-winner Paul Moravec. Haimovitz’s recording of Philip Glass’s Cello Concerto No. 2, “Naqoyqatsi,” with the Cincinnati Symphony and Dennis Russell Davies, recorded live in Cincinnati has received universal acclaim.

In 2006, Haimovitz received the Concert Music Award from ASCAP for his advocacy of living composers and pioneering spirit, and in 2004, the American Music Center awarded Haimovitz the Trailblazer Award, for his far-reaching contributions to American music. Born in Israel, Haimovitz has also been honored with the Avery Fisher Career Grant (1986), the Grand Prix du Disque (1991), the Diapason d’Or (1991) and he is the first cellist ever to receive the prestigious Premio Internazionale “Accademia Musicale Chigiana” (1999). Haimovitz studied at the Collegiate School in New York and at the Juilliard School, in the final class of Leonard Rose, after which he continued his cello studies with Ronald Leonard and Yo-Yo Ma. In 1996, he received a B.A.magna cum laude with highest honors from Harvard University. Matt Haimovitz plays a Venetian cello, made in 1710 by Matteo Gofriller. 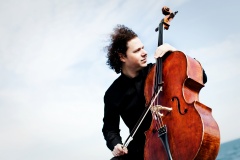