Since I remember myself, there were sounds of violin and piano. I must have been present during hundreds of hours of scrupulous work, when my grandmother was teaching my sister the violin, long before being aware of what it all really meant. Music was all around me. My mother played the piano. Often the violin students of The Moscow Conservatory came to rehearse chez nous, and that is how I became familiar with every microscopic detail of most violin pieces she had accompanied. My mother loved accompanying, she made everyone feel confident, even in most treacherous passages. We knew she would always wait, or, in any case, do just the right thing in order to support a player. Masterful accompanists are hard to come by; they must be cherished.

My first serious chamber piece was an early Haydn Quartet. There is no doubt, I was at my maximum capacity of being nervous performing the purest of music, with colleagues who had no opportunity to rehearse and run through the piece hundreds of times, as I did in Moscow with the solo repertoire. No need to describe the extremely competitive system in schools in the U.S. with its highs and lows. The luck was on my side while I was at The Cleveland Institute of Music with Linda and David Cerone, and later in The Indiana University. I won the Concerto Competitions and was able to get back on track performing with orchestras after a few years gap. In other contests, the luck came and went as it pleased. I failed in many. Won a few. Sadly, to this day, I have not learned the ultimate art of keeping a cool head when the jurors carry out the verdict “guilty.” I always want specific details on my performance and need an explanation on just why didn’t they like me; much like what an abandoned soul craves to hear when a relationship disintegrates.

For those who like parallels, I arrived to America with one suitcase, packed for at least a year; I left with two, plus small change. I moved to Paris, because my friend, the flutist Alexandra Grot had introduced me to my now dear friend and pianist Aurélien Pontier. The three of us were joined by a cellist Marc Coppey for a concert in memory of Anna Politkovskaya. Since the concert, Marc and I began performing together, increasingly feeling the need to share the stage and our lives. We enjoy playing in a trio with our Russian – Estonian friend Peter Laul, as well as with other musicians. Now in France, I continue freelancing, learning French and exploring the French music scene, anticipating... 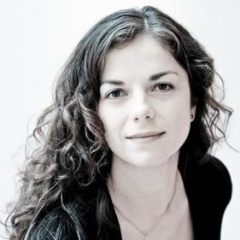