This wonderfully evocative phrase of Abbess Hildegard of Bingen – chosen as the title of Gothic Voices’ groundbreaking and award-winning first recording – is a fine description of the sound world that the ensemble inhabits. For more than thirty years Gothic Voices has been world-renowned for the excellence, refinement and spirituality of its performances of medieval music and has appeared throughout Europe and in the Americas.

Originally founded in 1980 by the scholar and musician Christopher Page, Gothic Voices has gone on to record twenty-three CDs for the Hyperion and Avie labels, three of which won the coveted Gramophone Magazine Early Music Award.

Gothic Voices is committed to bringing medieval music into the mainstream. Their imaginative programmes use their voices in varying combinations to produce authoritative performances of great beauty which have won the appreciation of audiences all over the world.

The ensemble also enjoys performing contemporary music, particularly pieces with medieval associations. Many of today’s composers are influenced by the medieval repertoire and its often experimental nature. Gothic Voices plans to give a renewed emphasis to the combination of old and new alongside its more traditional programmes. 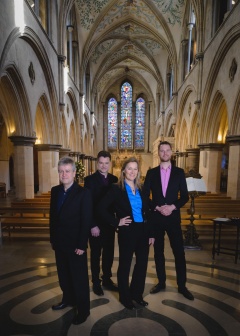