The Gothenburg Symphony is the National Orchestra of Sweden. Each year, about 100 concerts are held in the Gothenburg Concert Hall at Götaplatsen. The orchestra has the goal of becoming one of the foremost orchestras in the world by 2020.

In addition to concerts in the Gothenburg Concert Hall and on international tours, the orchestra performs every summer at Götaplatsen and in the Slottsskogen park, and gives guest performances at the concert hall in Vara. The Symphony Orchestra’s television channel GSOplay broadcasts concerts live and on demand in full HD. You can also find us at Google Cultural Institute.

The National Orchestra of Sweden
The Gothenburg Symphony was founded in 1905 and today consists of over 100 musicians. The orchestra’s home is the Gothenburg Concert Hall, which offers many opportunities for meetings and experiences for visitors of all ages.

Santtu-Matias Rouvali is the Chief Conductor. From season 2019-2020 he will get Barbara Hannigan and Christoph Eschenbach by his side as the orchestra’s first guest conductors – a strong three-leaf clover with three completely different artists.

Under the leadership of the conductor Neeme Järvi, 1982–2004, the orchestra made a number of international tours and around a hundred recordings, and established itself as one of the foremost orchestras in Europe. In 1997, the Gothenburg Symphony was appointed as the National Orchestra of Sweden.

Every year we have the pleasure of having a unique Artist in Residence with us – a strong artist with both magnificant musical skills and an inspiring artistry.

We are also a prooud partner to Barbara Hanningan´s mentoring program Equilibrium with focus on young singers at the beginning of his career.

Tours around the world
The Gothenburg Symphony received its international breakthrough in 1987, when the orchestra visited Asia and the USA. Subsequently, the orchestra has also toured in Japan, China and Europe, and performed at the BBC Proms in London, Lucerne in Switzerland, the Salzburg festival, the Musikverein in Vienna and the Barbican in London. 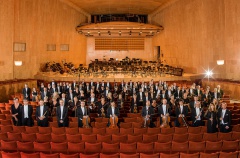