Vadim Gluzman’s extraordinary artistry brings to life the glorious violinistic tradition of the 19th and 20th centuries. Gluzman’s wide repertoire embraces new music and his performances are heard around the world through live broadcasts and a striking catalogue of award-winning recordings exclusively for the BIS label.

Highlights of his 2016-17 season include appearances in London at The Proms with the BBC Symphony and Edward Gardner, with the Chicago Symphony under Neeme Järvi, the NDR Elbphilharmonie Orchestra Hamburg under Christoph von Dohnányi, the Deutsches Symphonie-Orchester Berlin under Tugan Sokhiev, and with the Orchestre de Paris under Juraj Valčuha. He will tour the United States with the Orpheus Chamber Orchestra, including an engagement in New York at Carnegie Hall, and perform with Baltimore Symphony, NHK Orchestra in Tokyo, and the Orchestre Philharmonique de Radio France in Paris, among other engagements. Gluzman will lead performances with the Franz Liszt Chamber Orchestra and the ProMusica Chamber Orchestra in Columbus, Ohio, where he continues in his third year as Creative Partner and Principal Guest Artist.

This season Mr. Gluzman will give the world premiere performances of new concertos written for him by two of today’s most important composers: Sofia Gubaidulina’s Triple Concerto for Violin, Cello and Bayan with Elsbeth Moser, Nicolas Altstaedt and the NDR Radio Philhamonic in Hannover under Andrew Manze; and Elena Firsova’s Concerto for Violin and Cello with Johannes Moser and the Deutsches Symphonie-Orchester Berlin under Tugan Sokhiev. Gluzman has given live and recorded premieres of other works by Gubaidulina, as well as Giya Kancheli, Peteris Vasks, Michael Daugherty, and most recently, Lera Auerbach.

Vadim Gluzman’s latest CD for the BIS label features Sergey Prokofiev’s Violin Concertos No. 1 and 2, as well as the composer’s Sonata for Violin Solo, with Estonian National Orchestra conducted by Neeme Järvi. Accolades for his extensive discography on BIS include the Diapason d’Or of the Year, Gramophone’s Editor’s Choice, Classica Magazine’s esteemed Choc de Classica award, and Disc of the Month by The Strad, BBC Music Magazine, ClassicFM, and others.

Born in the former Soviet Union in 1973, Gluzman began violin studies at age 7. He studied with Roman Sne in Latvia and Zakhar Bron in Russia before moving to Israel in 1990, where he became a student of Yair Kless. In the United States, he studied with Arkady Fomin in Dallas and at the Juilliard School with Dorothy DeLay and Masao Kawasaki. Early in his career, Gluzman enjoyed the encouragement and mentorship of Isaac Stern which continued until the Stern’s passing in 2001. In 1994 he received the prestigious Henryk Szeryng Foundation Career Award.

Vadim Gluzman plays the legendary 1690 ‘ex-Leopold Auer’ Stradivari on extended loan to him through the generosity of the Stradivari Society of Chicago. 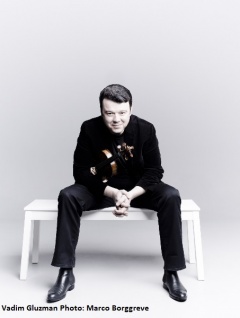