Mahan Esfahani was born in Tehran in 1984 and received his first guidance on the piano from his father before exploring an interest in the harpsichord as a teenager. He went on to study musicology and history at Stanford University, where he was mentored by George Houle, before studying intensively with Peter Watchorn in Boston and completing his formation with the celebrated Zuzana Růžičková in Prague. He was a BBC New Generation Artist from 2008-2010, a Borletti-Buitoni Trust prizewinner, and in 2014 Mahan was on the shortlist both for the Royal Philharmonic Society Instrumentalist of the Year and Gramophone Artist of the Year – all firsts for the harpsichord. In 2015 he was honoured with the BBC Music Magazine ‘Newcomer of the Year’ award and was nominated in three categories for the Gramophone Awards – Best Baroque Instrumental, Best Instrumental, and again Artist of the Year.

Since making his London debut in 2009 he has worked tirelessly to establish the harpsichord in the mainstream of concert instruments in classical and contemporary repertoire. This mission came to significant public attention when Mahan played the first harpsichord recital in the history of the BBC Proms in 2011. Since then, recent and upcoming highlights include solo performances at the Zurich Tonhalle, Cologne Philharmonie, Wigmore Hall and the Barbican Centre in London, Wiener Konzerthaus, Berlin Konzerthaus, Schloss Elmau, Munich’s Bell’Arte, the Frick Collection in New York, Sumida Symphony Hall in Tokyo, Denki Bunka Kaikan in Nagoya, the Aldeburgh Festival, the Bristol Proms at the Old Vic, the Laeiszhalle in Hamburg, Petronas Hall in Kuala Lumpur, the Kilkenny Arts Festival in Ireland, the Bruges Concertgebouw, Mogens Dahl Koncerthus in Copenhagen, Pharos Arts Trust in Cyprus, Howard Assembly Rooms in Leeds, the Rudolfinum in Prague, BRQ in Helsinki, the Library of Congress in Washington D.C., the Sheldonian Theatre in Oxford, and the Leipzig Bach Festival. In 2015 he made a last-minute appearance as concerto soloist with the Chicago Symphony Orchestra, thus launching his North American career. The 2015-2016 sees a tour of China with the Britten Sinfonia and concerto and recital appearances in Spain, Poland, Australia, Estonia, Norway, Turkey, the United States, and Germany, as well as three returns to London’s Wigmore Hall.

Following two successful albums for Hyperion Records – with C.P.E. Bach’s Württemburg Sonatas garnering a Gramophone Award and a Diapason d’Or, and the complete keyboard works of Jean-Philippe Rameau being named in the New York Times ‘Critics’ List of Top Recordings of 2014’ – Mahan Esfahani signed as an exclusive artist with Deutsche Grammophon. His first album for DG/Archiv, ‘Time Present and Time Past’ – a recording of music ranging from J.S. Bach and Scarlatti to Gorecki and Steve Reich – was released in Spring of 2015, garnering a ‘Choc de Classica’ in France. He also has recorded Byrd and Ligeti for Wigmore Live, winning yet another Gramophone nomination. Following a stint as Artist-in-Residence at New College, Oxford, he now continues his academic activities as professor of harpsichord at the Guildhall School of Music and Drama in London. 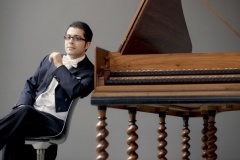