Sébastien Daucé, the artistic director, and the musicians met while studying at the National Conservatory of Lyon.A dedicated collaboration blossomed to unearth rare and neglected musical treasures, revealing, through their interpretation, a whole range of emotions within these works.

Since its foundation in 2009, Correspondances presents mainly 17th century French sacred music ; an era which saw produced a considerable number of masterpieces, some still unpublished, just waiting to be revived by young and passionate musicians. The first album of the ensemble, O Maria, dedicated to Charpentier and released by Zig Zag Territoires is awarded by the press : Choc Classica, Diapason Discovering and **** de Fonoforum.

The second album, L’Archange et le Lys, and first one to be dedicated to a sacred anthology of the composer Antoine Boësset is released by Zig Zag Territoires and confirms the quality of the interpretation with a Diapason Discovering and **** Classica.

Correspondances performs in Colombia. Correspondances begins a collaboration with the Early Music Festival of Ambronay and a residency at the Festival Musique & Mémoire. The ensemble is research partner at Fondation Royaumont around the Sacred Stories of Charpentier.

The ensemble is newly released by Harmonia Mundi : the third album of the ensemble revives its ties with Charpentier : The Litanies de la Vierge is awarded by a ffff Télérama, Diapason d’Or, Choc Classica of the Year, ***** Fonoforum, and Oustanding IRR.

In 2015, a collaboration blossomed with Sophie Karthäuser for Harmonia Mundi : the Leçons de Ténèbres de Michel-Richard De Lalande are awarded by a Choc Classica, ffff Télérama, Diapason d’Or of the Year, Best Disc of the Year De Standaard). After three years of reconstruction and reasearch, the Concert royal de la Nuit is released for the 300 anniversary of Louis XIV’s death.

Correspondances becomes National Artistic Company within the french ensemble supported by the Ministry. The ensemble is in residency at the Théâtre de Caen and associated to the MC2 Grenoble. 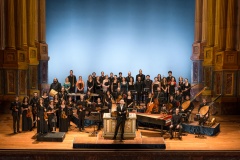