…at the very forefront of modern-day specialists in the performance of Renaissance vocal music. (International Record Review)

Comprising six professional singers from five European countries, Cinquecento takes its name from the Italian term for the sixteenth century. The pan-European structure of the ensemble (its members are from Austria, Belgium, England, Germany and Switzerland) harks back to the imperial chapel choirs of the 16th century, whose members would have been chosen for their musicianship from Europe's most prized musical establishments.

Formed in Vienna in October 2004 the ensemble has now established itself as one of Europe’s premier vocal sextets. The ensemble aims to bring the lesser known sixteenth-century choral repertoire from the courts of imperial Austria to a wider public, as well as performing a varied range of Renaissance polyphony with a view to illuminating to audiences the kaleidoscopic diversity of compositional styles operating within Europe over the period. Recent interest from modern composers has also seen the ensemble add a variety of contemporary works to its repertoire.

Aside from numerous performances in Austria an increasingly heavy touring schedule abroad has already taken the ensemble to Germany, France, Holland, Belgium, Italy, Switzerland, Poland, Portugal, Slovakia, Czech Republic, Slovenia and South Korea. Since September 2005 Cinquecento has been ‘Ensemble in Residence' at the church of St Rochus and Sebastian, Vienna performing a polyphonic mass setting each week.

In 2009 Cinquecento was awarded the “Förderpreis Deutschlandfunk” (Award for Outstanding Promise) by the Musikfest Bremen in conjunction with German Radio.

Since 2006 Cinquecento has been recording for the British label Hyperion, focusing on Habsburg court composers from the sixteenth century. Having attracted high praise from the international media, as well as Gramophone Magazine Editor’s Choice and a prestigious Gramophone Award nomination, these recordings have variously been awarded: the ORF Pasticcio Preis, International CD Compact “Renaissance” Award, as well as the Deutsche Schallplatten Kritik Preis. Their 8th CD, which will focus on secular works by composers at the 16th century Habsburg court, is due for release in early 2014. 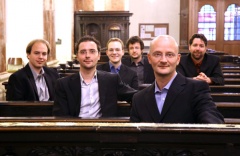