Nadia and Angela Tirino undertook the study of the piano at a young age and graduated with honors from the State Music Conservatory “L. Cherubini ”of Florence under the guidance of the Masters Giuseppe Fricelli and Giovanni Carmassi.

They have collaborated, in the world premiere, with the RAI radio-actress Annamaria Sanetti and with the actor Leonardo De Carmine in the realization of the opera “the tin soldier” by Maestro Composer Bruno Rigacci for the bicentenary since the birth of the writer and poet Danish HC Andersen enjoying considerable success with the public and critics.

They have participated in numerous masterclasses with internationally renowned pianists, such as Franco Scala, Valery Voskobojnikov, Bruno Canino, Michele Ignelzi and Massimiliano Damerini.

They are part of the jury of the “Vito Frazzi” National Piano Competition which takes place annually at the “Orazio Barbieri” Council Hall of the municipality of Scandicci.

They are piano teachers at the Music Academy of Florence and the middle and high schools of the Florence board; collaborate with the Conservatory of Siena and with the Royal School of Music in London for the ABRSM exams.

Their continuous interest in the didactic field has led them to deepen other fields of study and research such as the “Kodaly” and “Dalcroze” methods and to complement these with the use of music therapy especially in students with specific learning disabilities.

In May 2017 They recorded the cd “Invitation to the dance” and subsequently signed a contract with the prestigious Brilliant Classic record company for the world premiere recording of the complete opera for piano duo of the romantic author H.V. Herzogenberg. 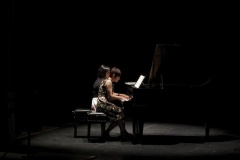